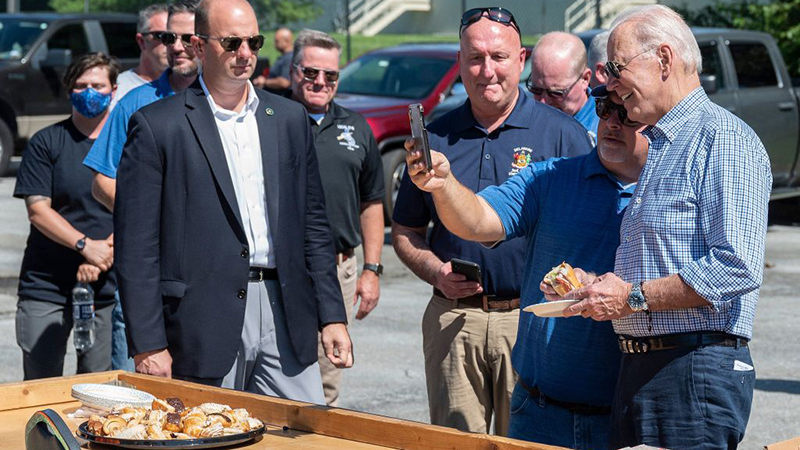 Joe Biden laughed and took selfies with people in Delaware on Labor Day Monday, meanwhile hundreds of Americans are being held hostage by the Taliban on planes in Afghanistan.

As we reported yesterday, the Taliban is holding hostage six planes full of Americans at at Mazar-i-Sharif airport, a situation that President Trump predicated would unfold.

The State Department hasn’t attempted to free the Americans, and Joe Biden spent Monday speaking with mothers of people he bumped into in the street.

Tennessee Rep. Diana Harshbarger noted that Biden is prioritising his vacation above getting Americans out of the hell they find themselves stranded in in Afghanistan.

“It’s a travesty of the worst kind. He’s prioritizing his vacation over the lives of American citizens. He kept his promises to the Taliban and he’s breaking his promises to Americans to get them out. And God only knows what will happen to them if they can’t get out,” Harshbarger told Fox News.

“This is an inept administration. Don’t ever say it can’t get worse because every time someone says that, things happen and it gets worse,” she added.

Even Democrats are slating Biden for his dithering.

Senator Richard Blumenthal (CT) issued a statement Monday urging “I have been deeply frustrated, even furious, at our government’s delay and inaction.”

Blumenthal continued, “There will be plenty of time to seek accountability for the inexcusable bureaucratic red tape that stranded so many of our Afghan allies. For now, my singular focus remains getting these planes in the air and safely to our airbase in Doha, where they have already been cleared to land.”

“I expect the White House and State Department to do everything in their power – absolutely everything – to make this happen. These are Americans citizens and Afghans who risked everything for our country. We cannot leave them behind,” the stamens further noted.

The State Department has also been accused of attempting to steal credit for getting four Americans out of Afghanistan, when in reality it was veteran Cory Mills and his private team who facilitate the rescue.

Video: Biden Admits ‘Kill List’ Of Americans May Have Been Given To Taliban