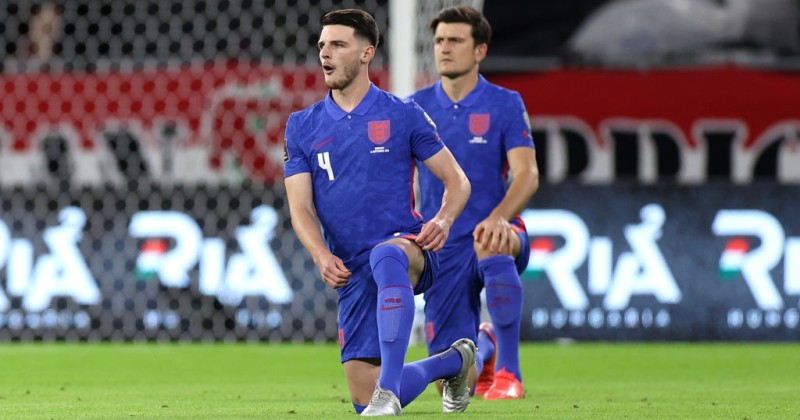 Last night saw possibly the loudest ever example of ‘take a knee’ being booed as Hungary fans jeered at England players during their performance of the BLM-linked gesture.

As soon as England players took a knee, the crowd responded with loud booing and whistling.

Compared to other instances of the gesture being jeered, this was almost certainly the loudest negative reaction it has ever received, with huge numbers of the thousands in attendance at the Puskas Arena joining in.

The media later tried to distract from the issue by claiming that Hungary fans had aimed racist chants at black England players.

As we previously highlighted, following England’s defeat to Italy in the final of Euro 2020 back in July, the media whipped up a contrived hysteria surrounding racist comments posted on social media networks.

Prior to the Euro 2020 football tournament, Hungarian Prime Minister Viktor Orbán defended fans who booed Ireland players taking a knee before a match, asserting that the display was a “provocation” and is only being performed in some European countries due to their historical guilt over slavery.

Before a match between Germany and Hungary, authorities in Munich attempted to light up the Allianz Arena in LGBT rainbow colors in an effort to chide Hungary over the passage of a law that forbids promotion of homosexuality, transgenderism to children.

UEFA refused the request, insisting that the stunt was a political message, which is forbidden under their rules.

Mouthpieces for the sports media in England have continually asserted that the ‘take a knee’ gesture is a generic way of opposing racism and has nothing to do with BLM, yet it was introduced immediately after the protests over the death of George Floyd during a time when Premier League footballers wore shirts emblazoned with the words “Black Lives Matter,” while giant BLM flags were also displayed in stadiums across the country.

Report: Virginia Tech Instructor Apologises In Syllabus For Being White