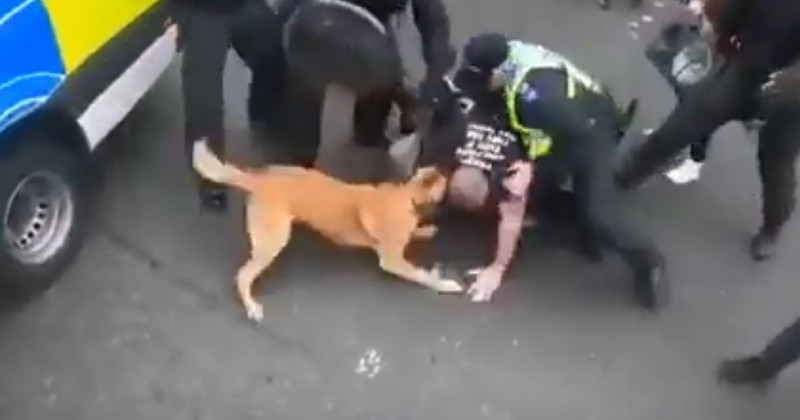 Video out of Newcastle in the UK shows a police dog mauling an anti-lockdown protester who reportedly escaped a police kettling operation during the demonstration.

The clip shows the man attempting to evade capture before being tackled from behind by a cop wearing riot gear.

Three officers then pin the man to the ground as the dog continually mauls his neck for a period of about 15 seconds while a woman screams for police to drag the animal away.

ENGLAND: Police set an attack dog on a protester IN Newcastle at the anti-covid passport protest over the weekend. pic.twitter.com/EdV6OcvZ5l

“Some observers said the man had been among a group of protesters who were “kettled” by police and escaped,” reports RT.

The brutal scene ironically took place in front of a police van with the words “proud to protect” written on the side.

Another clip shows a smug-faced officer literally on his high horse imperiously wielding his baton and pointing it at protesters as a threat.

Absolutely SICK behaviour from @StuCoates1 batting innocent, peaceful protestors in Newcastle today, from his high horse (literally) then goading them with his baton. And you're a Sargeant. We don't need Police like you. Leave before you are sacked. #policebrutality #unfitcopper pic.twitter.com/IQcnY39wYB

Northumbria Police later announced that 12 arrests had been made during the protest but did not comment on the dog attack incident.

Hundreds of police officers, many of them wearing riot gear, were called in to intimidate the protesters, despite only about 300 participating in the demonstration.

Superintendent Steve Wykes subsequently claimed that the police response was necessary to “deliver a proportionate policing response to the protest activity.”

Another woman claimed on Twitter that police pushed a woman who was holding a child while batons were “out from the beginning.”

The protesters’ main concern was the potential introduction of vaccine passports to the UK which could see the unvaccinated being openly discriminated against by government and businesses.

What should have been a peaceful protest yesterday in Newcastle. Northumbria police, absolute wankers the lot of them. Batons out from the beginning, setting a dog on a man already on the ground. I actually witnessed them violently push a woman that was holding a child. Scum. pic.twitter.com/lLVuibpIAf