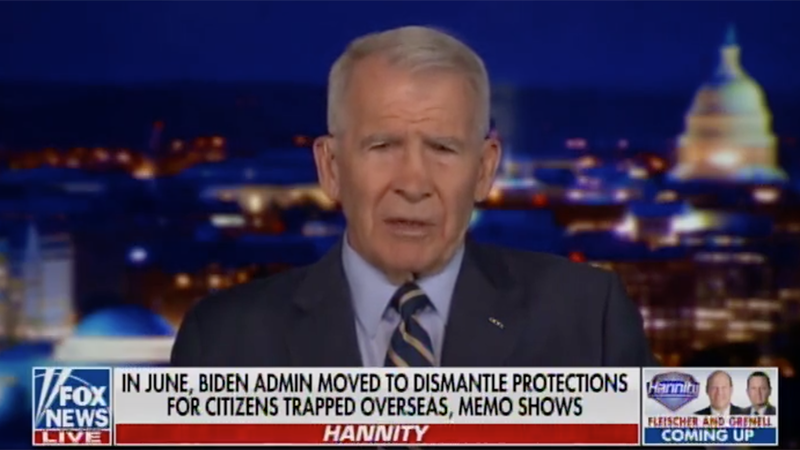 Appearing on Hannity Thursday, Lt. Col. Oliver North warned that the Taliban has managed to obtain the personal details of everyone who worked with the US in Afghanistan, and are using the information to hunt down and execute people.

“They’ve got the bank records. They got it all thanks to the embassy… It is being reported that the Taliban has captured the payroll data from the American embassy and the Kabul banks showing the names, addresses and phone numbers for locals now being hunted down,” North stated.

North also warned that the Taliban have captured US weapons, including drones that can be sold off to and reverse engineered by Russian, Chinese and Pakistani intelligence, causing a major national security threat.

North also revealed that Anti-Taliban resistance groups in the Panjshir Valley have called him appealing for help, prompting the Colonel to ask “is anyone in the US government answering the phone?”

North also warned that Communist Chinese agents are reported to be on hand in Afghanistan working with the Taliban against US interests.

North stated that “If Biden can’t figure out how to deal with these problems, he ought to step down.”

He continued, “The scary part of that is that in every case of a president not finishing his term, you know who becomes the president. That’s a scary prospect too.”

North’s comments come as it was revealed that, despite Biden’s claims that ‘chaos was always factored in’ to the withdrawal, officials at the Kabul embassy directly warned him about the imminent danger of the Taliban taking control in JULY.

The Wall Street Journal reports that embassy officials in Kabul sent a memo to Secretary of State Antony Blinken as well as other State Department officials on July 13th warning of the exact scenario that has unfolded.

The warning came five days after Biden told America that “The Taliban is not the North Vietnamese Army, they’re not. They’re not remotely comparable in terms of capability. There’s going to be no circumstance for you to see people being lifted off the roof of an embassy of the United States from Afghanistan.”

The Taliban is now in control of more of Afghanistan than it was in 2001:

State Dept. Issued Warning That Americans Left In Afghanistan Will Be ‘Without Assistance’, Then Deleted It