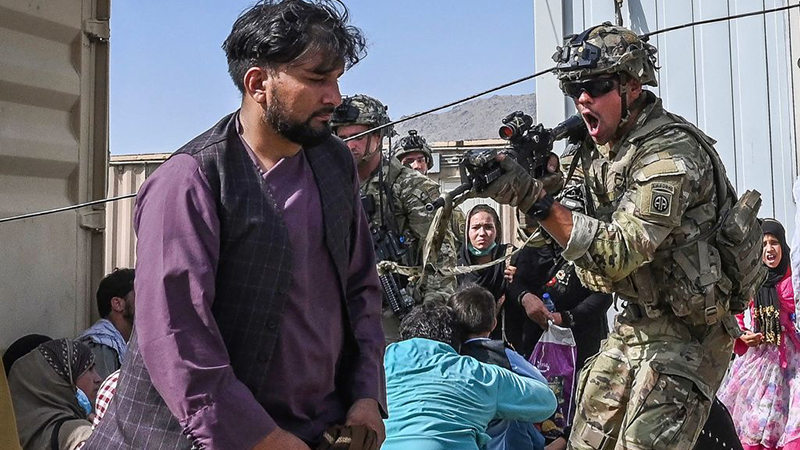 Reports have surfaced that British and American forces are unhappy with each other at Kabul airport, as UK Military commanders are overseeing rescue missions into the city itself, while US commanders are sitting tight, leaving US nationals to fend for themselves.

Thousands of Americans trapped in the city were again advised by the US embassy that it cannot protect them if they attempt to get to the airport, and even if they make it, they might not be able to get on a plane out of there:

The British government, however has sent in 900 elite para troopers to rescue some 4000 nationals in Kabul, and told the soldiers to expect face to face combat with the Taliban.

Sources have indicated that the U.S. command is unhappy with the British forces going into the heart of Kabul, claiming that it is putting the withdrawal agreement at risk (isn’t a bit late for that?).

The British troops are also said to be livid at the way America is treating Afghans who are desperate to flee the Taliban.

Yet American troops are also said to be pissed off with their higher ups not letting them run rescue missions alongside the Brits.

Former Congressional staffer turned reporter Matthew Russell detailed what is unfolding according to sources in Kabul:

Others noted that some British troops have been tasked with observing US forces in case they suddenly decide to leave, because without the 6000 US troops in place, the British forces could easily be overwhelmed:

Fresh video has also emerged showing the scene outside the airport, which looks like hell on earth:

This is what it looks like outside the north gate at the airport in Kabul. I won't mention why this location is important. I will say that the @CENTCOM commander, who agreed to allow this airport to be the primary/only evacuation point, should be dismissed/replaced immediately. pic.twitter.com/yfvWRJaJ7n

How are American nationals supposed to get to the airport through this?

Laughably, the State Department has accused the Taliban of reneging on the deal to allow Americans to get to the airport.

Deputy Secretary of State Wendy Shermansaid “We have seen reports that the Taliban, contrary to their public statements and their commitments to our government, are blocking Afghans who wish to leave the country from reaching the airport.”

“Our military partners are engaging directly with the Taliban to make clear that we expect them to allow all American citizens, all 3rd country nationals and all Afghans who wish to leave to do so safely and without harassment,” she added.

Right, so while they are killing anyone they find who may have worked with the British or American governments, you’re asking the Taliban nicely to not block the way are you?

The Daily Mail reports on the scenes at the airport, describing “stampeding crowds and Islamist fanatics using rifle butts and sticks to beat protesters.”

Further horrific reports have emerged of women tossing their own babies into razor wire fences toward British soldiers in an attempt to get them out of the country.

People are so desperate to escape the #Taliban that they’re passing babies and kids forward to the gate at #Kabul airport. #kabulairport #AfghanEvac pic.twitter.com/6NSlIffrD1

This chaos could have been avoided, but the Biden administration scrapped existing withdrawal plans and then seemingly failed to come up with any replacement contingencies but still went ahead with the withdrawal anyway:

The report adds “That memo, which was marked sensitive but unclassified and was signed by Deputy Secretary Brian McKeon, approved the “discontinuation of the establishment, and termination of, the Contingency and Crisis Response Bureau (CCR),” a new State Department entity created during the Trump administration to coordinate emergency response services overseas.”

Insanity: UNICEF Is Taking The Taliban At Face Value On Promise To Educate Women And Girls