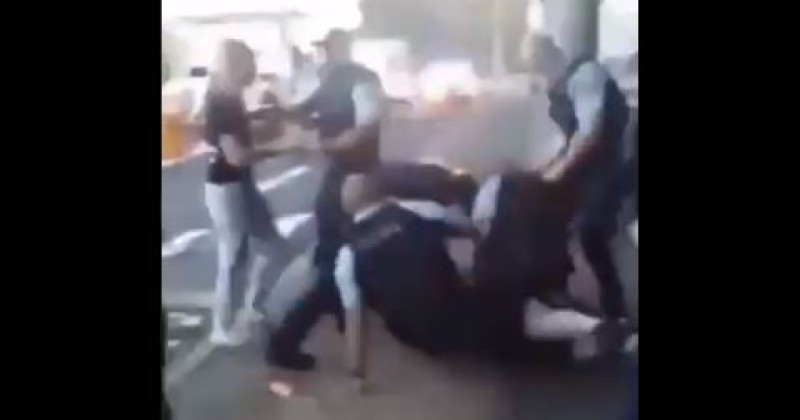 Yet another chilling video out of locked down Australia shows police pepper spraying pre-teen children for not wearing face masks.

The encounter apparently began after the kids were spotted (and presumably reported by a snitching member of the public) for not wearing face coverings inside a shopping mall.

The clip shows a police handcuffing more than one of the kids as the girl recording the video points out that some of the officers involved aren’t even wearing masks.

The situation then escalates into a physical squabble as the kids begin shrieking in terror.

The brave officers then drag one of the evildoers to the ground before hitting the complaining kids with a blast of pepper spray to ensure total compliance.

“You pepper sprayed a 12-year-old!” states the girl.

Videos like this are now emerging daily out of Australia, where authorities continue to pursue a ludicrous ‘zero COVID’ policy which necessitates repeated rolling lockdowns of entire regions over relative few coronavirus cases.

As we highlighted earlier this month, another clip showed an elderly man suffering a suspected heart attack after he was arrested by police for not wearing a mask outside while exercising.

Authorities have also made clear they won’t hesitate to go “door-to-door” to perform COVID tests on citizens to keep them in line.

As we reported earlier, footage from a news conference shows a police chief in Australia chastising a man because when authorities paid him a visit, he wasn’t at home and had gone out for some “fresh air.”

British Man in Singapore Given 6 Weeks in Prison For Not Wearing Face Mask, Psychiatric Assessment