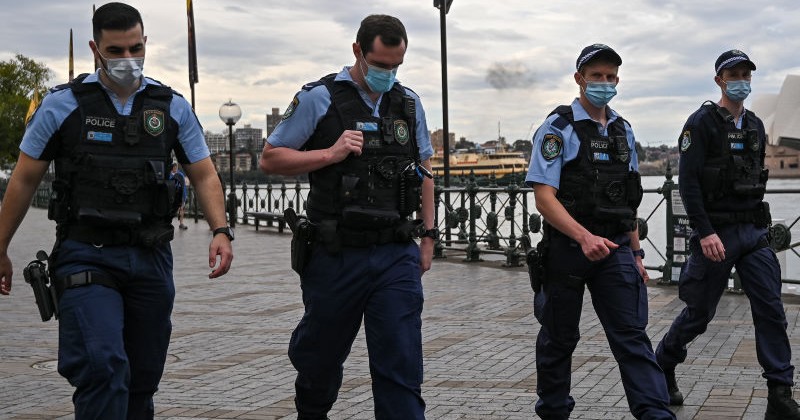 Footage from a news conference shows a police chief in Australia chastising a man because when authorities paid him a visit, he wasn’t at home and had gone out for some “fresh air.”

The officer said that the incident had been detected as a result of the military and New South Wales police undertaking home checks on people who are supposed to be self-isolating under the country’s draconian lockdown regime.

The cop says that officers visited a home in south-west Sydney and “found a person that should be there, wasn’t there, they made a number of enquiries and not that long after, that person returned to the front of the house in a motor vehicle.”

Police then gave the man a “penalty infringement notice” which “stated that he hopped in his car and went out for some fresh air and hadn’t been anywhere else.”

The man was then publicly chastised for the crime of seeking out “fresh air.”

NSW, Australia has lost the plot. Full psycho tyrannical ……if you go outside for fresh air… you will get an infringement notice and will be checked on again pic.twitter.com/wh5yKfvns3

“If you are gonna behave like this…if you’re gonna step outside the health orders, you will be checked on and you will get an infringement notice and that person will continue to be checked on to make sure that they comply,” the police chief added.

During the press conference, he also proudly announced that cops and military had checked on no fewer than 2,300 houses in Sydney.

As we highlighted last week, with police already paying aggressively enforced home visits to anyone suspected of being infected, the Premier of Victoria also said that authorities wouldn’t hesitate to also perform “door-to-door” COVID tests on citizens.

Aussies have also been told not to go anywhere near their grandkids and not to engage in conversation with each other, even if they’re wearing masks.

People who merely post anti-lockdown information online could also face fines of up to $11,000 dollars under an absurdly authoritarian new law.

This is all part of a harebrained ‘zero COVID’ policy which ensures such measures could continue for years into the future.

As we document below, there are also examples of Aussies being carted off to mental asylums because they questioned the government narrative on COVID.