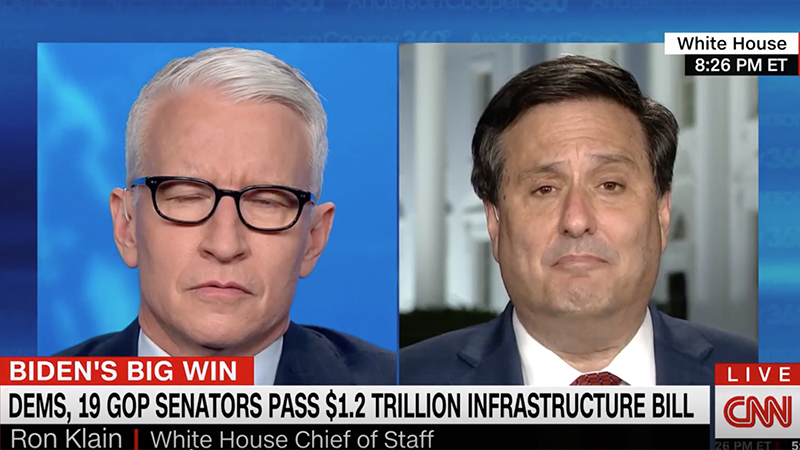 White House Chief of Staff Ron Klain declared Tuesday on CNN that the Biden administration is “working closely with private employers” to get them to mandate coronavirus vaccines for employers, claiming that “That’s how we’re going to be able to go back to normal.”

“We need to put requirements on people to get vaccinated. That’s how we’re going to get this behind us,” Klain said.

Klain referred to the decree for all federal workers to get vaccinated, as well as active duty military.

“Well, you know, two weeks ago, the president announced we were going to require all federal civilian employees to either be vaccinated or to face rigorous testing, limits on their activities, other restrictions to try to really pressure them to get vaccinated,” he said.

“Yesterday, the secretary of defense, joined by the Chairman of the Joint Chiefs, Gen. Milley, said that they were going to mandate vaccines for our troops,” Klain added.

So, government workers and soldiers are in the bag, now the question remains, how to force those pesky everyday Americans to take their shots.

“We’re obviously working closely with private employers to try to encourage them to do the same thing,” Klain added.

The comments come after Big Tech companies announced they would mandate the shots, and Joe Biden admitted he would like to be able to mandate the entire country to take vaccines:

Yesterday, Biden also said he was ‘checking’ to see if he has the power to overrule States on banning federal mandates: