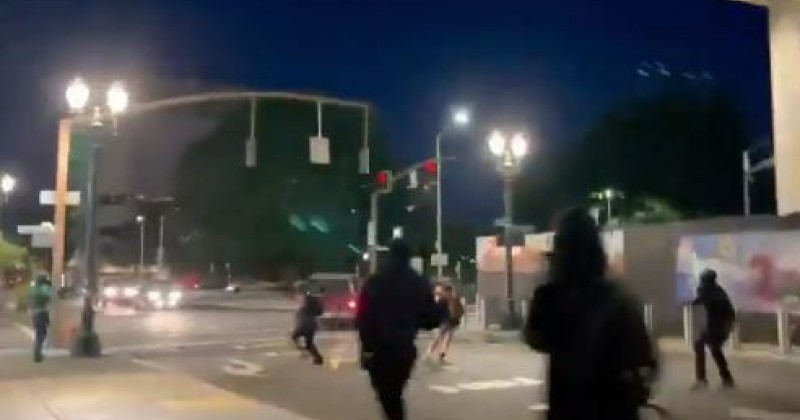 Numerous videos out of Portland show chaos on the streets after Antifa members armed with projectiles tried to hunt down attendees of an Evangelical Christian music event.

After assaulting attendees of the festival the previous day, Antifa members complained that they were outnumbered given the sheer size of the crowd at the Christian event.

Huge crowd has gathered in downtown Portland to sing along to Christian evangelical worship music at the same spot where Christian families were violently assaulted by antifa the day prior. Antifa have not shown up so far since they are vastly outnumbered. https://t.co/svmeVKpu7N pic.twitter.com/r1oYoCdduG

Portland: A large crowd of Christian worshippers gather to sing the day after antifa violently attacked a small family worship event in the same location. Antifa are observing the event from afar but have not attacked because they’re outnumbered. pic.twitter.com/Pl7CYCSAut

However, as soon as night fell and the larger crowd dispersed, Antifa sought to pick off attendees one by one as they chased them on the streets and attacked them with missiles and pepper spray.

Scenes of violence in downtown Portland as antifa militants fought in the street with people as they dispersed after the Christian worship event. pic.twitter.com/fPUd6ruuVv

“Go hit that car! Hit that car!” one individual shouts as the mob chase down the Christians.

Chunks of concrete were also thrown.

Lawlessness in the streets of downtown Portland as antifa run around seeking right-wing people to target after the Evangelical music event. pic.twitter.com/WA4xpk3OYh

Antifa battled with a right-wing volunteer security group after the Evangelical worship event as people dispersed downtown Portland. The streets were shut down. pic.twitter.com/QdBoFc8vVY

Another video shows a man armed being verbally abused by Antifa members (the only reason they don’t physically attack him being the fact that he’s armed with a rifle).

The Antifa extremists demand the man be arrested by the same police they want to defund and abolish.

Portland: A man armed with a rifle is followed & threatened by a mob of antifa. He calls police and walks calmly to the central police station while antifa, who want police abolished, demand he be arrested. pic.twitter.com/WUbn7OfjeO

The clashes continued all throughout the night.

Rolling clashes continued in the streets in downtown Portland as a right-wing security group dispersing a Christian music event is attacked by antifa. pic.twitter.com/NwiGsEVcH8