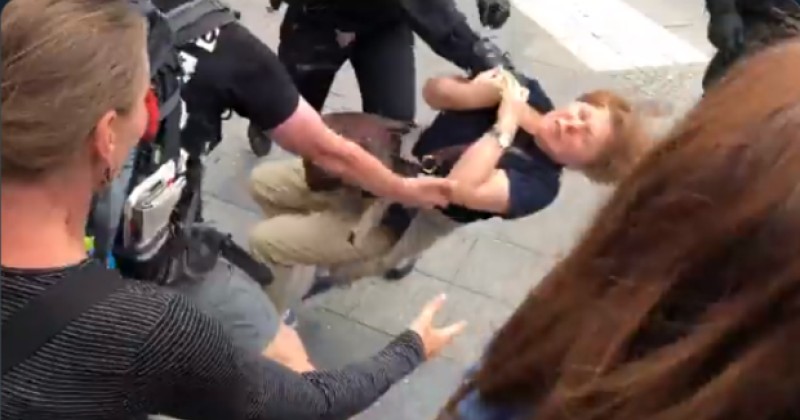 The UN’s Special Rapporteur on Torture Nils Melzer has requested more information on an incident in which a female anti-lockdown protester in Berlin was grabbed by the throat and brutally thrown to the ground by riot police.

As we highlighted earlier, the demonstrations ended up with a whopping 600 people being arrested amidst innumerable brazen examples of police brutality, including against children, that were caught on camera.

Germans were protesting against plans to ban unvaccinated people from a plethora of different venues, including restaurants, cinemas and stadiums.

One video clip shows an elderly protester merely attempting to walk past a police officer dressed in riot gear before he grabs her neck with both hands and throws her to the floor.

Cops were obviously given orders to enforce a draconian crackdown on the protesters given their behavior throughout the day, which looked like something out of the 1930’s.

The clip caught the attention of Nils Melzer, a professor of international law, whose official title is United Nations Special Rapporteur on Torture and other Cruel, Inhuman or Degrading Treatment or Punishment.

“This has just been brought to my attention,” tweeted Melzer. “Can anyone provide my office with the specifics / witness statements of this incident and whether an official investigation has been launched?” he asked.

This has just been brought to my attention.

Can anyone provide my office with the specifics / witness statements of this incident and whether an official investigation has been launched?

Send to: [email protected]
(please not via Twitter-reply/DM)

It’s highly unlikely that any investigation will take place given that riot police were clearly ordered to conduct themselves with wanton disregard for basic dignity and human rights.

Another video clip showed a police officer reacting to a young boy’s concern over the treatment of his mother by forcefully pushing him to the floor by his head.

Another clip shows two old women also being pushed to the floor by police.

Police shove elderly people to your ground to protect their health. Welcome to Berlin. pic.twitter.com/Jlvj3DBIF7

Another protester also collapsed and died while being harassed by police to show his ID.

Anti-lockdown protesters have been vilified and dehumanized by the media and by vaccine cultists who lobby for them to be treated like lepers.

That’s why such scenes, which would cause outrage if they occurred at a Black Lives Matter or LGBT march, are either totally ignored or callously celebrated.

Video: Only Store Not Looted in South African Shopping Mall is the Book Shop