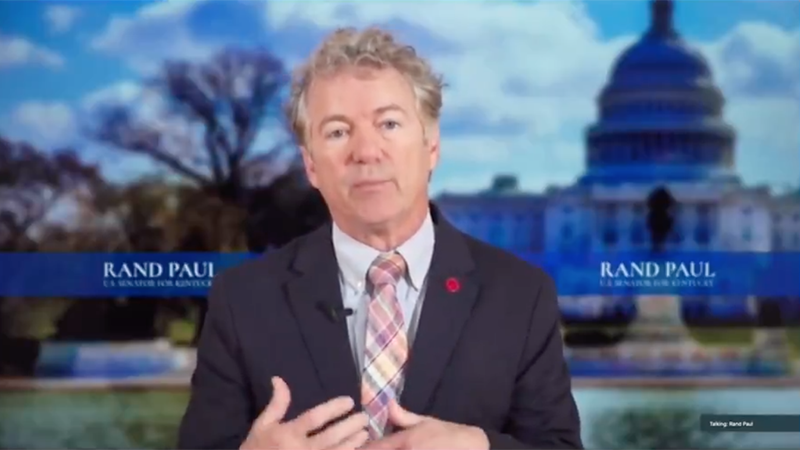 The feud between Senator Rand Paul and Anthony Fauci continues to evolve, with Paul slamming Fauci this weekend for refusing to actually answer any questions in Congress last week regarding his ties to the Wuhan lab, and instead responding with “an ad hominem attack.”

“I think he has self-interest in not being attached to this research, because more and more of the evidence is pointing towards the virus having come out of that lab, if it did, you can see how moral responsibility or culpability attaches to Dr. Fauci because he had the poor judgment to fund this lab,” Paul said during an appearance on WBKO.

Paul continued, “There are reports that the Chinese military has actually been working on weaponizing viruses. So I think it was a poor judgment. Even as much as a month ago, Dr. Fauci was asking the Judiciary Committee whether he still trusted the scientists and the Chinese scientists. And he says, Oh, of course.”

“He was also asked in 2012, if a bug should escape, if a virus should infect a researcher, escape and become a pandemic, what then? And he said, Well, the science and the research is worth it, even if a pandemic should occur,” Paul also noted.

Paul added, “This research still goes on in the United States, we should want to know, you know if the NIH is still funding this type of research in North Carolina? And in Galveston, do we want this to occur? Are we worried that we could have the worst virus leak out of the lab?”

Last week Paul wrote to the Department of Justice with a criminal referral for Fauci, noting in his letter to AG Merrick Garland, “I write to urge the United States Department of Justice to open an investigation into testimony made to the United States Senate Committee on Health, Education, Labor, and Pensions by Dr. Anthony Fauci, Director of the National Institute of Allergy and Infectious Diseases, on May 11, 2021.”

The Senator urged that “these experiments combined genetic information from different SARS-related coronaviruses and combined them to create novel, artificial viruses able to infect human cells.”

Despite Fauci’s denials, this exactly “fits the definition of gain-of-function research,” Paul emphasises, further asking the DoJ to investigate “any materially false, fictions, or fraudulent statement or representation,” Fauci has made on the matter.

“I ask that you investigate whether Dr. Fauci’s statements to Congress on May 11, 2021 violated this statute or any other,” Paul wrote in the letter.

Meanwhile, Fauci appeared on his favourite propaganda platform CNN Sunday and declared that he is considering bringing back mask mandates, even for the fully vaccinated.