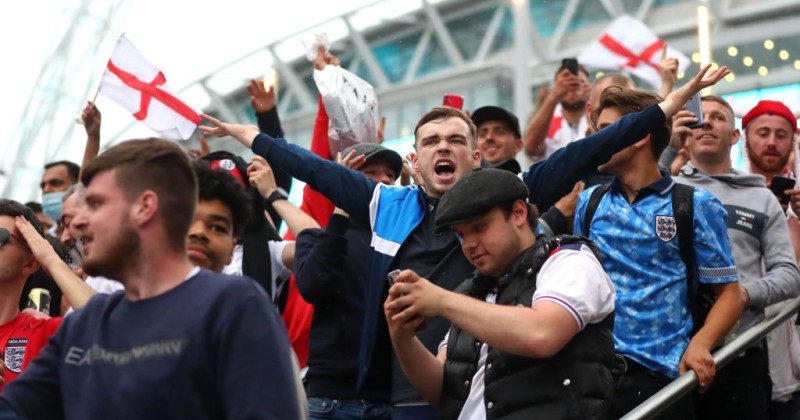 According to a new report, the UK government is preparing to announce that football fans who haven’t received a full COVID-19 vaccination will be banned from entering stadiums as a two-tier society of the jabbed and the jabbed-not moves closer.

Yesterday’s ‘freedom day’ in the UK was supposed to see a lifting of all coronavirus restrictions, but Prime Minister Boris Johnson moved swiftly to pour cold water on the notion with the announcement that nightclubs and other venues where large crowds gather will bar entry to those who haven’t had the vaccine.

This led to speculation that the measure could be extended to pubs and other venues, with ministers refusing to rule it out.

However, some nightclub owners are vowing not to enforce the rules, arguing that it will make their businesses untenable as they operate on low profit margins that would be wiped out by unvaccinated people being kept away.

Now it’s being reported that football clubs are also likely to be told that only supporters who can prove they’ve had the jab will be allowed to enter stadiums after the season starts later this summer.

“Plans are being drawn up that will require football fans to prove they have had two doses of Covid vaccination before they can attend matches from the end of September,” reports the Daily Mail.

“First they came for the nightclubs, and I didn’t say anything…”https://t.co/lKc4h0knF7

“If the measure is introduced, Government would be expected to fall back on the previous definition of ‘large crowds’, set out in step three of the roadmap out of lockdown, which was a capacity of 16,000 spectators.”

“However, the legal requirement on football fans to be vaccinated before they attend games – a negative Covid test would not be enough – will only come into force if coronavirus infections rates, deaths and hospitalisations are high or there are dangerous variants circulating.”

The fact that what the government calls “dangerous variants” will likely be circulating for years makes that qualification rather redundant.

The plans are being drawn up despite the governments Events Research Programme, which conducted test pilots of crowded events, “revealed few infections linked to outdoor sports events.”

This underscores once again how, despite the UK government previously asserting vaccine passports would be “discriminatory,” medical apartheid is being introduced in order to create de facto permanent lockdown for millions of unvaccinated people.

Similar laws in France have led to nationwide protests and riots, so it remains to be seen whether the more sedate British population will react with anything but near total compliance.