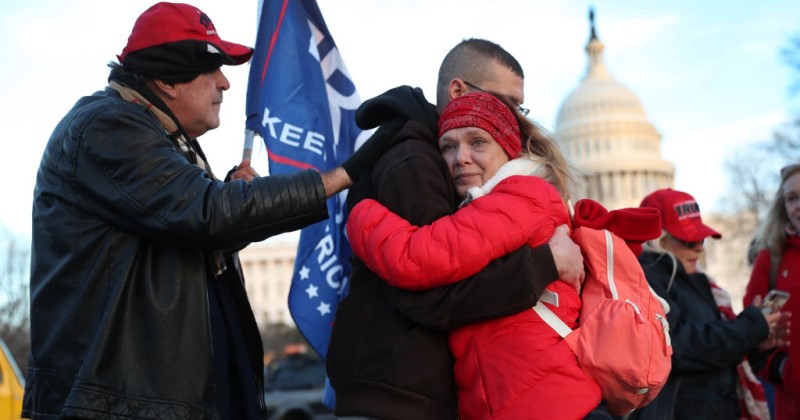 Journalist Piers Morgan says the media knows the identity of the Capitol police officer who shot Ashli Babbitt dead on January 6 but isn’t reporting it due to pressure from authorities.

Babbitt was one of five people killed during the raid of the Capitol Building. Video footage of the incident showed the US Air Force veteran attempting to get through a set of locked doors inside the building before being shot in the neck.

The identity of the officer responsible for killing Babbitt remains unknown to this day.

However, journalist Piers Morgan revealed today that media outlets are fully aware of his name and background but are fearful of releasing the information due to warnings from law enforcement.

“I know who it is,” writes Morgan. “I know his name, his age, his rank, his family status and his service record.”

*NEW COLUMN*
I know who killed Capitol Hill rioter Ashli Babbitt but you don’t, and neither does her family – and whether you think she’s a traitor or a patriot, that is a shameful failure of public transparency and justice.https://t.co/52eSsbTG6j pic.twitter.com/XPifp7IsNi

I know all this because DailyMail.com journalists did their job and found out, as I am sure have journalists from other news organizations.

Although I’m equally sure that many prestigious left-leaning news organizations – who ought to know better – have probably not even bothered.

Nobody has reported the information yet because there has been enormous pressure put on the media from the Capitol Police and the officer’s legal team not to do so for fear it would endanger his life.

Morgan went on to describe continued efforts to keep the officer’s identity a secret “a shameful failure of public transparency and justice.”

Babbitt’s family have also been rebuffed in efforts to find out the officer’s name, with her widower Aaron Babbitt being forced to file a lawsuit claiming the Metropolitan Police Department failed to comply with a Freedom of Information Act request.

Critics have contrasted the case to the death of George Floyd. Despite officer Derek Chauvin’s life clearly being put under risk, his identity was quickly revealed to the public.

President Donald Trump has recently used his platform to draw attention to the situation, while also asserting that he personally knows the identity of the officer involved.

“People are being treated unbelievably unfairly when you look at people in prison, and nothing happens to antifa, and they burn down cities and killed people,” Trump said Wednesday during a press conference. “There were no guns in the Capitol … except for the gun that shot Ashli Babbitt, and nobody knows who that man were [sic].”