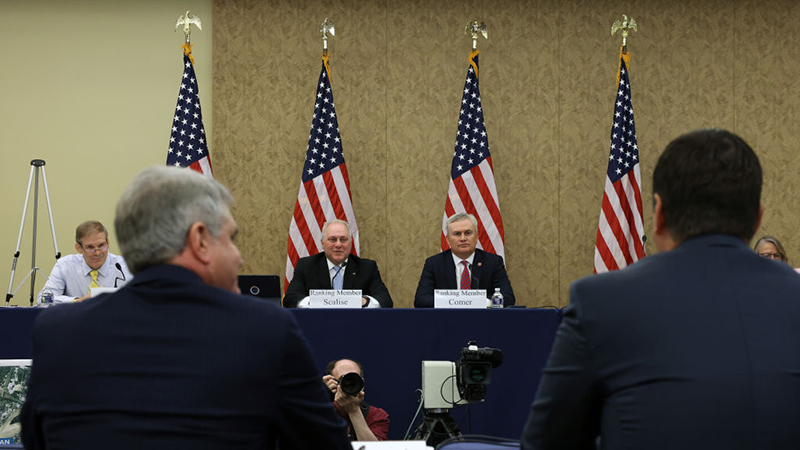 Republicans in the House held a hearing Tuesday to discuss origins of the coronavirus pandemic and heard from experts that it is ‘highly likely’ the virus originated at the Wuhan Institute of Virology, and that the Chinese military was involved in running the lab much earlier than previously thought.

The hearing of the House Select Subcommittee on the Coronavirus Crisis went ahead without any Democrat involvement, and no appearance from either NIH director Dr. Francis Collins and NIAID director Anthony Fauci, who both declined to attend.

As Minority Whip Steve Scalise noted last week, Democrats have not held any hearings and without subpoenas it is near impossible to get health officials to turn up to any Republican led hearing.

During the hearing, Scalise declared “We have asked that question for more than a year and requested that the House majority hold hearings to investigate the origins of COVID. Perplexingly, Speaker [Nancy] Pelosi [(D-Calif.)] has refused to allow a single hearing — calling it a ‘diversion.’”

“As the American people will hear today from our expert witnesses, this is far from a diversion,” Scalise asserted.

During the hearing, which lasted three hours, Dr. Brett Giroir, who served as Assistant Secretary for Health in President Trump’s HHS, stated “This is a worldwide pandemic in which millions of people have died. It may have been the result of a lab-leak — and we think highly likely it is.”

When questioned on ‘gain of function’ research at the Wuhan lab, Giroir said “it’s unbelievable to me that coronavirus work wouldn’t even get into the process.”

“If you look at the abstract from the latest grant that was done to EcoHealth, it talks about using protein sequence data, infectious clone technology, in vitro and in vivo infection experiments. This is all gain-of-function. How this could not get into the P3 process is unbelievable,” Giroir continued, referencing the P3CO oversight board that decides on U.S. funding of the research.

Also appearing at the hearing were Dr. Steven Quay, founder of Atossa Therapeutics, and Richard Muller, a physics professor at the University of California at Berkeley.

The two recently authored a study that concluded “COVID-19 has a genetic footprint that has never been observed in a natural coronavirus.”

“A natural zoonosis has two processes,” Quay said, adding “It jumps into humans but it can’t do very well… but then it’s building up its repertoire, it’s learning how to infect humans. And then finally, and this takes a year to 18 months. So here, it was human-to-human from the get-go.”

“That simply indicated gain-of-function,” Muller explained, noting “The fact that it was human from the get-go implies gain-of-function. There’s no way that we know that could happen [naturally].”

The scientists also all noted that more within the scientific community didn’t speak out earlier because they feared being ostracised or labeled racist.

“Physicians who were on the task force, or who were around the task force, were under tremendous pressure from their scientific colleagues to not even show up with the president on stage,” said Giroir, referencing Trump’s repeated use of the phrase ‘China virus’.

“There was such bias against the president, that even thinking that you were helping the president, you were excommunicated from the scientific community,” Giroir added.

Former State Department investigator Dr. David Asher also appeared at the hearing and noted that there is a possibility that the virus was part of a Chinese bioweapons program.

“They were working on a program related to synthetic biology and gain-of-function using serial passage revolutionary technology approaches quite publicly,” said Asher.

“Of course they were working on dual-use research of concerns, it’s called DURC. And the DURC, in this case, if it gets out of a lab and it’s not contained promptly, could result in a weapons-like release,” Asher added.

He continued, “Whether they deliberately did it, I have very little sense they did. But were they deliberately working on developing the capability to use advanced pathogen genetic capabilities for war in a way that no one has seen ever employed? Yeah they were. Of course they are.”

Representative Michael McCaul (R-Tx), ranking member of the House Foreign Affairs Committee and Head of the China Task Force, also announced that he has received intelligence indicating the Chinese Military may have taken over the Wuhan lab earlier than had previously been reported.

“New testimony now received by my committee reveals the Chinese military potentially took over this lab, not in January 2020 as was reported, but earlier in 2019,” McCaul said.

“The Chinese military were actually in the facility at the time of 2017. That signals the CCP was worried about something at the lab before the world even knew what COVID-19 was. Why else would they put the Chinese military in charge?” McCaul questioned.

The State Department Fact Sheet, released in January, previously noted that secret military research was being conducted at the lab, noting “Despite the WIV presenting itself as a civilian institution, the United States has determined that the WIV has collaborated on publications and secret projects with China’s military. The WIV has engaged in classified research, including laboratory animal experiments, on behalf of the Chinese military since at least 2017.”

McCaul proclaimed that “I believe it’s time to completely dismiss the wet market as a source of the outbreak,” adding “I would say this is a diversion by the CCP, and all roads point to the lab.”

he continued, “In a city five times larger than the City of Houston, the first signs of a new illness were all clustered around the old WIV facility — the Level 2 facility. Then on September 12, 2019, the WIV suddenly took their virus database offline. You have to ask the question: “Why? Why did they take this offline?” Removing the database would prevent hospitals in the city from comparing samples from sick patients to the lab’s library of viruses. If the CCP was attempting to cover up a leak of coronaviruses being studied at the WIV, this would remove the ability to link COVID-19 back to the WIV.”