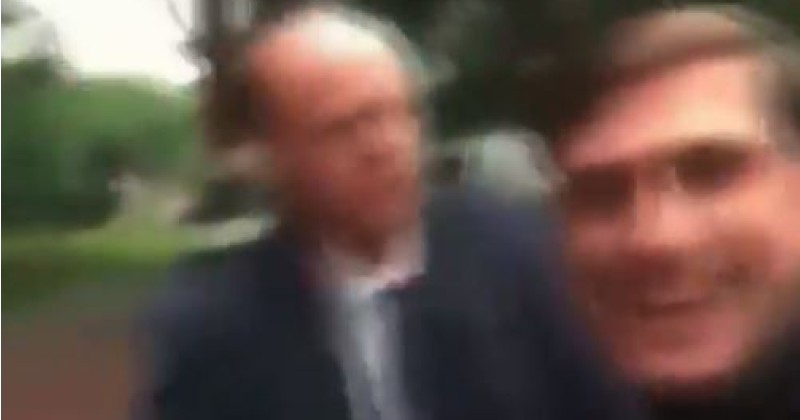 After England’s Chief Medical Officer was accosted by a couple of drunk idiots on the street trying to get a selfie, the media reacted hysterically, claiming that Chris Whitty had been viciously harassed with government ministers calling for the culprits to be found and locked up.

The clip shows two men who are clearly inebriated trying to get a video selfie with Whitty as he attempts to walk away from them.

“Oi oi… Please, just one photo. One photo mate,” they tell Whitty. Although the men do lay hands on him, at no point do they appear to be overly aggressive or preparing to attack him. There is also a police van parked close to the scene.

Footage has emerged of Professor Chris Whitty being manhandled by two men in the street.

While Whitty is clearly uncomfortable during the incident, the reaction to it was venomous, with vaccines minister Nadhim Zahawi calling for the police to hunt down the evildoers.

“This is disgusting and these thugs must be found and charged. Zero tolerance for harassing a public servant,” tweeted Zahawi.

This is disgusting and these thugs must be found and charged. Zero tolerance for harassing a public servant. https://t.co/hrdHbAoBgK

The incident even elicited the intervention of the Prime Minister, with Boris Johnson tweeting that the video depicted “despicable harassment.”

I condemn the behaviour of these thugs. Our hard-working public servants should not have to face this kind of intimidation on our streets and we will not tolerate it.

The story is the top headline on virtually every British media outlet, with the press treating the incident as if it had happened to the Pope.

GB News host Kirsty Gallagher subsequently started trending on Twitter, with the mob incensed that she said the video was not “massively disturbing.”

What do you think about the video of Chris Whitty?

Kirsty Gallacher and Darren McCaffrey have their say. Do you agree? Email [email protected] pic.twitter.com/tVmi3eXVG2

Indeed, many of the same people who vehemently advocated Nigel Farage getting ‘milkshaked’ (actual assault) are having hissy fits over what amounts to two drunk idiots trying to get a selfie with Chris Whitty.

"It's OK when we do it!" pic.twitter.com/SBPPsUYzav

What happened to Whitty may have been slightly unpleasant, but the rabid over the top reporting by the media and the vitriolic reaction from government ministers is telling.

They are essentially attempting to deify Whitty because he has been a figurehead of the numerous lockdowns imposed on Brits for the past 15 months.

Those policies have caused incredible harm to the country, increasing poverty, preventing people from getting cancer screenings and massively increasing depression and domestic abuse.

A study last year by the University of Bristol found that lockdown will kill more than 675,000 people as a result of the economic fallout.

But apparently, two louts trying to get a selfie with Chris Whitty, the man partly responsible for those policies, is somehow more disgusting.