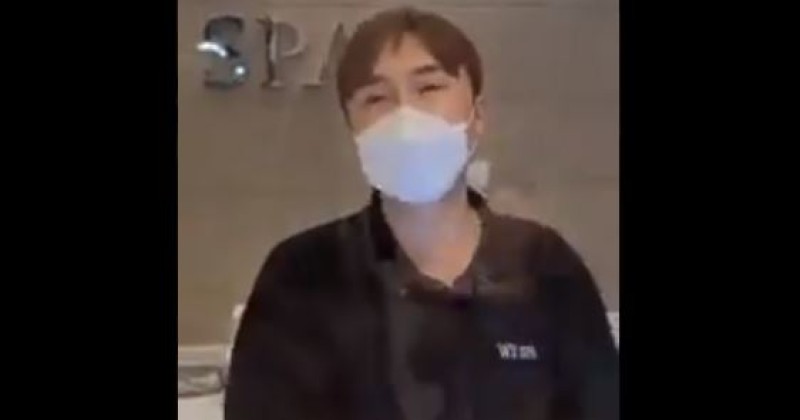 Staff at Wi Spa in Los Angeles dismissed a woman’s complaint that a man was exposing his penis to little girls in the women’s area by insisting that the individual had a right to be there due to his “sexual orientation.”

A video clip shows the woman approaching reception staff and telling them, “I just wanna be clear with you – it’s OK for a man to go into the women’s section, show his penis around other women, young little girls underage – your spa Wi Spa condones that – is that what you’re saying?”

The staffer says the man is allowed to be there because of his “sexual orientation.”

“So Wi Spa is in agreement with men who just say they are a woman and they can go down there with their penis and get into the women’s section,” she added, asking if it was OK for women to go into the men’s section and expose their breasts.

A man flashed his penis in front of little girls at a spa and was allowed to do it because he claimed to be a woman. If you watch this video and find yourself siding with the man, please realize that you are not only insane but evil.

Another woman then supports the individual who made the initial complaint before asking for a refund.

Another man then attempts to defend the man who exposed his penis, asking, “Are you talking about a transgender person?”

“There is no such thing as transgender – he has a dick,” the woman responds.

Another man then appears to tell her to “shut the fuck up.”

“As a woman I have a right to feel comfortable without a man exposing himself, OK?” she responds.

Other members of the spa then tell the woman to find a different spa, before the man continues to ask whether the individual in question is “a transgender person.”

As Matt Walsh highlights, the spa previously received a review from a woman who complained about a man who was in the women’s locker room with his penis exposed bragging about how many women he’d slept with.

This spa has an online review dating from 2018 complaining about a man in the women's locker room with his penis out, bragging about all the women he's slept with pic.twitter.com/LDsmVOnWL2

“This guy is not transgender, he just appears to be a pervie,” she wrote.

Apparently, the spa responded by citing the law, which said they couldn’t bar him for his gender identity, only his behavior.