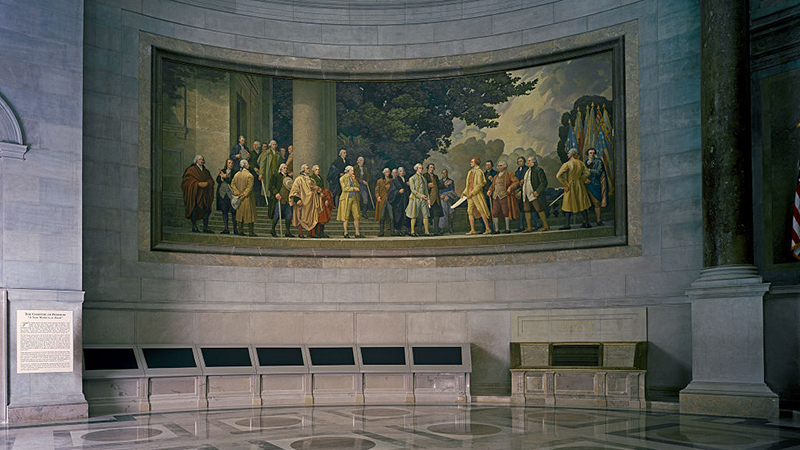 A National Archives ‘task force’ on racism has suggested placing trigger warnings around the building housing founding documents including the U.S. constitution, as well as declaring that the historical portrayal of the founding fathers has previously been “too positive”.

Fox News reports that the group has proclaimed the National Archives’ Rotunda building, which houses the Declaration of Independence, the U.S. Constitution and the Bill of Rights, as an example of “structural racism”.

The task force has decreed that the building lauds “wealthy White men in the nation’s founding” and that documents on display contain “legacy descriptions that use racial slurs and harmful language to describe BIPOC [Black, Indigenous and other People of Color] communities,” as well as other offensive terms including “elderly,” “handicapped” and “illegal alien.”

The group wants new descriptions added to exhibits to “contextualize the records,” and notes placed to “forewarn audiences of content that may cause intense physiological and psychological symptoms.”

It also suggests creating “safe spaces” where those who cannot handle the exhibits dedicated to the nation’s founding can retreat and mentally stabilise themselves.

The report also states that events should be staged such as “dance or performance art in the space that invites dialogue about the ways that the United States has mythologized the founding era.”

The task force had a particular suggestion for how to portray the author of the Declaration of Independence, Thomas Jefferson, noting that he is “described in this sample lesson plan as a ‘visionary’ who took ‘vigorous action’ to strengthen the ‘will of the nation to expand westward.”

It continues, “The plan does not mention that his policy of westward expansion forced Native Americans off their ancestral land, encouraged ongoing colonial violence, and laid the groundwork for further atrocities like the Trail of Tears.”

Critics described the development as “the radical Left’s latest attempt to sow division and rewrite our history.”

Cassie Smedile of conservative group America Rising asserted that “With Democrats controlling every lever of our government, these efforts have only become more flagrant and pervasive.”

“No institution, agency or classroom is off limits,” Smedile continued, adding “The American people deserve to be made fully aware of the radical Left’s schemes, and we’ll continue to expose them.”

This development is the culmination of years of indoctrination in schools, colleges and universities literally re-writing the history of America’s founding with the goal of overturning the the concept of E Pluribus Unum or “Out of Many, One”, and further dividing the country and its people.

Reuters Study: America Has the Least Trusted Media In The World