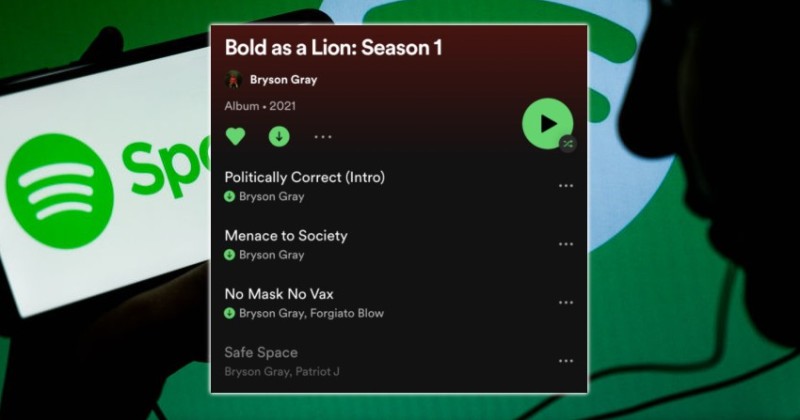 Spotify has banned a song called Safe Space that literally opens with the line “they might ban me for this song,” because it contains lyrics critical of the LGBT movement and BLM.

A track called Safe Space by conservative rappers Bryson Gray and Patriot J was blacklisted by the streaming giant, which initially denied that it had censored the song.

Gray’s album Bold as a Lion: Season One is still available on the platform, but the Safe Space song is grayed out and unplayable.

“Their collaboration that Spotify apparently considered too controversial to let its subscribers decide whether or not to listen to touched on pretty much every topic that “triggers” the left-leaning social and other media: transgenderism, issues that would be qualified as so-called “fatphobia,” the legitimacy of the 2020 presidential election, and support for the BLM movement.”

My distribution company just emailed me and CONFIRMED THAT SPOTIFY BANNED MY SONG. THEY DID NOT GIVE ME A REASON. They told me that they were “investigating” it. Wow. I’ve never seen this in my life. pic.twitter.com/MIa3vXfXAy

Patriot J responded by pointing out that other black rappers can glorify death, crime and all kinds of immoral and disgusting lifestyles, “but if you mess around and rap about traditional values and expose truths they will BAN YOU!”

As we highlighted back in March, Spotify announced that it would begin censoring songs that contain “misinformation,” a totally arbitrary approach which is completely open to abuse by the company’s notoriously woke employees.

Music icon Ian Brown revealed that Spotify had deleted his anti-lockdown song Little Seed Big Tree, while it was also reported that Spotify employees threatened a mutiny if the company didn’t blacklist episodes of the Joe Rogan podcast.

This once again underscores how Big Tech is mimicking how state censors implemented the system of socialist realism in the former Soviet Union to ensure that art or music which expressed dissident thought was blacklisted.

In order to entrench loyalty to the Communist Party and advance a utopian image of Soviet society, “The purpose of socialist realism was to limit popular culture to a specific, highly regulated faction of emotional expression that promoted Soviet ideals.”

The tyranny of censorship that was once implemented by totalitarian governments is now enforced by multi-billion dollar corporations.

And the regressive left loves it.