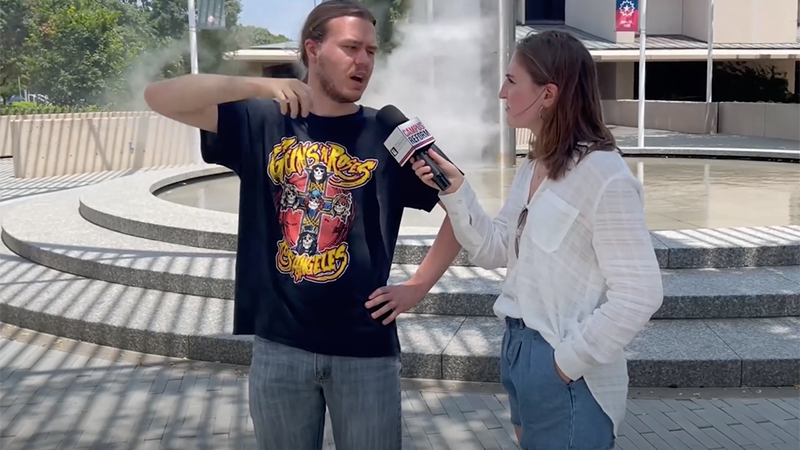 With today, June 14th, being Flag Day, Campus Reform visited the University of Texas in Dallas to see what students think their country’s flag represents.

Reporter Ophelie Jacobson was subject to some disturbing comments, with many saying they feel the U.S. flag is a global symbol of war and genocide.

“A lot of things come to mind. First of all, war. Second of all, we’ve also taken a bit of land from Native Americans,” one student commented, adding “it’s just really terrible that we’ve done all these things and this flag kind of reminds me of that, of all the sins we’ve committed against others.”

The same student agreed that the flag represents ‘racism’, claiming “the whole ‘patriotism’ thing sweeps that narrative of racism, oppression and the like under the rug.”

Another student said the flag represents “nationalism, exclusiveness, and selfishness,” adding “I’ve definitely seen the American flag used as a symbol of racism,” and suggesting supporters of President Trump waving the flag at rallies is one example of that.

Another student stated that “absolute love of the American flag is correlated to extremism.”

Most students didn’t even know there was a day to celebrate the flag and opined that it is either unnecessary or ‘redundant’.

Only one student said that the American flag represents ‘freedom’.

One could argue that this sad state of affairs is a result of years of foreign interventions by globalists using America as their vehicle to undermine freedom, as well as documented anti-American indoctrination in schools and colleges.

As Suffolk County College Professor Nicholas Giordano has warned, basic facts about The Constitution are being skipped over in the classroom in favour of an ‘Anti-American’ globalist theory based on ‘past sins’.

Governor Abbot: Texas Will Build Its Own Border Walls