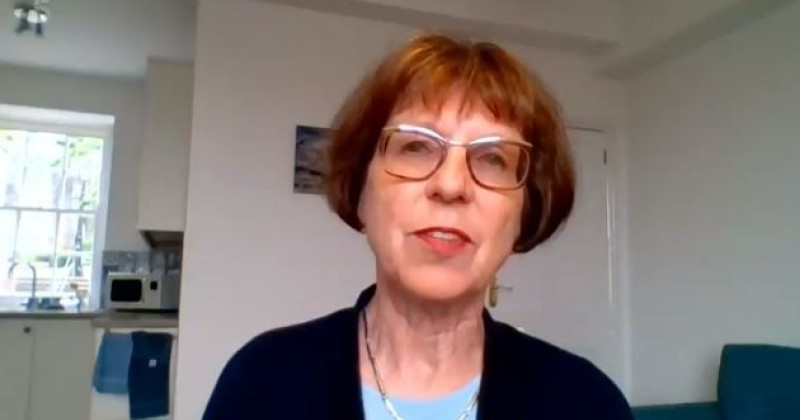 A UK government adviser and former Communist Party member Susan Michie says that mask mandates and social distancing should continue “forever” and that people should adopt such behaviour just as they did with wearing seatbelts.

Michie, who is a Professor of Health Psychology at UCL and a leading member of SAGE, said such control measures should become part of people’s “normal” routine behaviour.

Vaccines are a really important part of pandemic control but it is only one part. [A] test, trace and isolate system, [as well as] border controls, are really essential. And the third thing is people’s behaviour. That is, the behaviour of social distancing, of… making sure there’s good ventilation [when you’re indoors], or if there’s not, wearing face masks, and [keeping up] hand and surface hygiene.

We will need to keep these going in the long term, and that will be good not only for Covid but also to reduce other [diseases] at a time when the NHS is [struggling]… I think forever, to some extent…

I think there’s lots of different behaviours that we have changed in our lives. We now routinely wear seatbelts – we didn’t use to. We now routinely pick up dog poo in the parks – we didn’t use to. When people see that there is a threat and there is something they can do to reduce that [to protect] themselves, their loved ones and their communities, what we have seen over this last year is that people do that.

Michie’s comments once again emphasize how many scientific advisers have become drunk on COVID-19 power and never want to relinquish it.

David Nabarro, a special envoy from the WHO, said that vaccines won't be enough to end the pandemic, and that we'll need to adapt our lifestyles too.

“Unsurprisingly, Channel 5 News made absolutely no effort to scrutinise these claims. The programme’s presenter raised no objection to the idea that mask-wearing and social distancing could continue “forever”, resorting only to friendly laughter,” writes Michael Curzon.

“Professor Michie’s co-panellist, a fellow scientist at UCL, Dr Shikta Das, said: “I think Susan has made a very good point here,” adding that the vaccine roll-out has created a “false sense of security”. She concluded: “I don’t think we are yet ready to unlock.” How’s all that for balance!”

Perhaps unsurprisingly, Michie is known to be a long-time Communist hardliner and was so zealous in her beliefs she garnered the nickname “Stalin’s nanny.”

Her sentiment echoes that of fellow government adviser Professor Neil Ferguson, who once acknowledged that he was surprised authorities were able to “get away with” the same draconian measures that Communist China imposed at the start of the pandemic.

“[China] is a communist one-party state, we said. We couldn’t get away with [lockdown] in Europe, we thought… and then Italy did it. And we realised we could,” said Ferguson.

Professor: Historians Will Look Back On Lockdowns As ‘Most Catastrophic Event Of All Human History’