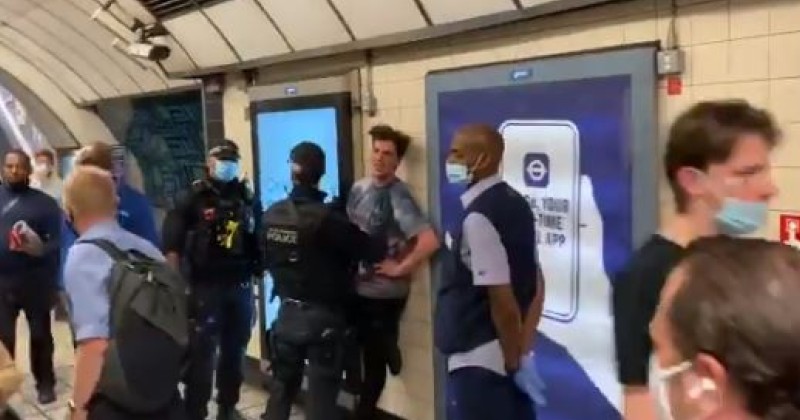 A video out of London shows up to 10 police officers confronting a man in a tube station for not wearing a mask.

The clip shows the maskless criminal being surrounded by a security guard and two police officers, one of whom is completely violating “social distancing” by touching him.

At least six other officers are also on hand close by monitoring the situation.

London: Plenty of real crime taking place, but resources surely best used on multiple officers dealing with one guy for not wearing a mask. pic.twitter.com/4VmYs8sF5k

“Ten coppers have restrained one man,” says the individual filming the video, before he apparently gets into arguments with other members of the public.

While more than half a dozen police officers are needed to deal with one maskless man, London continues to experience high rates of actual violent crime, with stabbings and shootings a daily occurrence.

All social distancing rules and mask mandates are supposed to end on “freedom day,” June 21st, although government advisers are once again pressuring the government into scrapping the lifting of restrictions on that date.

The same advisers admitted using “mind control” and “totalitarian” tactics to cower the British public into total compliance during the first lockdown, although somehow they have still retained their authority.

As we highlighted yesterday, lockdown measures are likely to remain in place beyond June 21st despite the fact that for 11 out of the last 12 weeks, deaths have been below the 5 year average.

Earlier today, we reported on UK government adviser and former Communist Party member Susan Michie, who told a news station that mask mandates and social distancing should continue “forever” and that people should adopt such behaviour just as they did with wearing seatbelts.