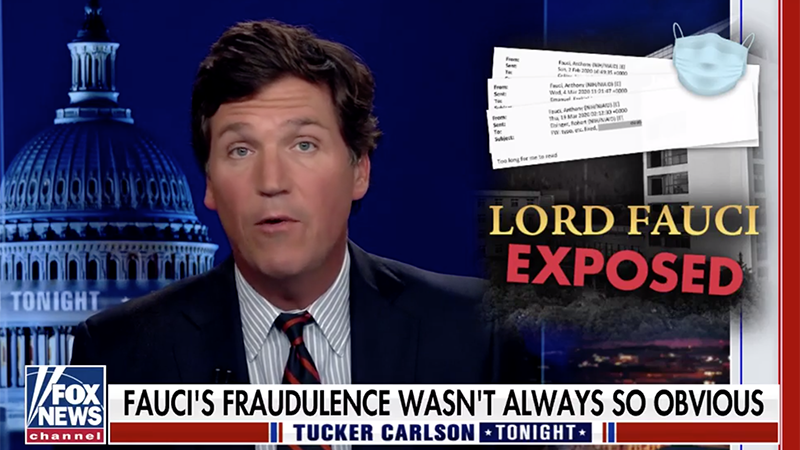 In the wake of the revelations stemming from the release of Dr Fauci’s emails, Host Tucker Carlson charged that the White House chief medical advisor has repeatedly lied under oath about what he knew regarding the origins of the pandemic, and should be under criminal investigation.

“Dr. Fauci is just another lying bureaucrat… From the beginning, Tony Fauci was worried that the public might conclude COVID had originated at the Wuhan Institute of Virology,” Carlson noted, calling the released emails the “mother-load”.

Carlson continued, “Why was Fauci be concerned that Americans would conclude that? Possibly because Tony Fauci knew perfectly well he’d funded gain-of-function experiments at that same laboratory.”

“The emails prove Fauci lied about this under oath,” the host asserted, pointing to one email from an immunologist called Christian Andersen very early after the outbreak warning Fauci that from his team’s initial probe, features of the virus “(potentially) look engineered.”

“The ‘Baric’ in that attachment refers to Ralph Baric, a virologist based in the United States who collaborated with the Wuhan Institute of Virology.,” Carlson highlighted, adding that “Baric worked with a woman called Dr. Shi Zhengli — known as the “Bat Lady,” because she manipulates coronaviruses that infect bats.”

The host then noted that when Rand Paul asked Fauci about this very gain of function research at the Wuhan lab, he denied having any knowledge of it.

“In retrospect, that looks a lot like perjury,” Carlson urged.

The host also noted how Fauci’s lies led to tech companies censoring any information pertaining to the lab leak theory, potentially aiding in a cover up.

Carlson also covered Fauci’s email interactions with Peter Daszak, the guy who not only funded the research at the Wuhan lab, but the guy who then “investigated” the lab for the World Health Organisation and acted as a “fact checker” for Facebook on the subject of coronavirus.

Carlson noted that “Strangely, most of this specific email from Daszak to Fauci has been redacted under FOIA section (b)(7)(A). That specific exemption to disclosure applies to: “records or information compiled for law enforcement purposes, but only to the extent that production could reasonably be expected to interfere with enforcement proceedings.”

“Are Dazak and Fauci under criminal investigation? We can only hope they are. They certainly deserve it,” the host emphasised.

Despite the revelations that the emails contain, Fauci wasn’t asked a single meaningful question about them in an interview with MSNBC Wednesday, in fact he was simply told that the email make him look good:

This is exactly why Americans don’t trust the establishment media.

TL;DR: Fauci’s Response to Physicist Who Warned China Was Covering Up COVID