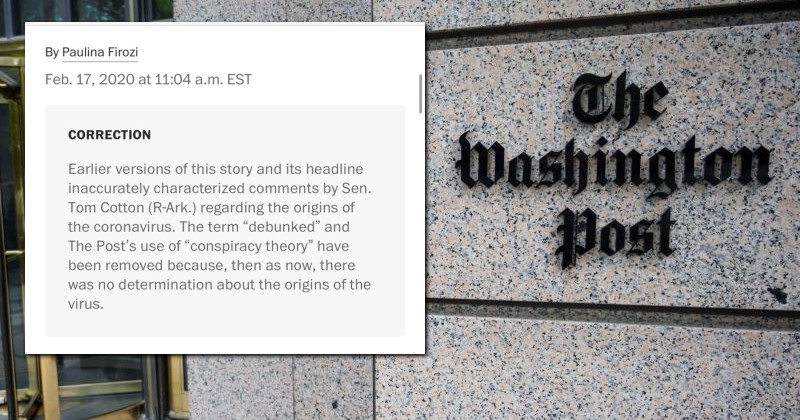 The Washington Post has become the latest media outlet to reverse its earlier insistence that the Wuhan lab leak theory was a “debunked conspiracy theory.”

The newspaper published an article in February 2020 by Paulini Firozi labeling the explanation a “debunked conspiracy theory” but has now been forced to issue a retraction.

“Earlier versions of this story and its headline inaccurately characterized comments by Sen. Tom Cotton (R-Ark.) regarding the origins of the coronavirus,” states the retraction. “The term “debunked” and the Post’s use of “conspiracy theory” have been removed because, then as now, there was no determination about the origins of the virus.”

The correction was made after independent journalist Michael Tracey “reported that journalist @paulina_milla had flagrantly mischaracterized a key expert she quoted in the article.”

Just saw this. The Washington Post has now “corrected” its Feb 2020 article declaring the lab leak theory a “debunked conspiracy” after I reported that journalist @paulina_milla had flagrantly mischaracterized a key expert she quoted in the article https://t.co/pYMc8edeCq pic.twitter.com/lgwkbpm40b

The Post becomes the latest in a growing list of media outlets and ‘fact checkers’ that have been forced to walk back their insistence that the lab leak theory was an impossibility.

Last week, Facebook announced that it was reversing a policy that banned posts which claimed COVID-19 was “man-made” just months after asserting that the theory had been “debunked.”

Politifact was also forced to pull a ‘fact check’ that claimed it had “debunked” the lab leak origin theory of COVID-19.

However, some are still ludicrously clinging on to other ways to dismiss the whole issue, with the New York Times’ Apoorva Mandavilli tweeting last week that it was “racist” to discuss it at all.

Video: Senator Cotton Says China “Hasn’t Paid Enough Yet For Unleashing This Plague On The World”