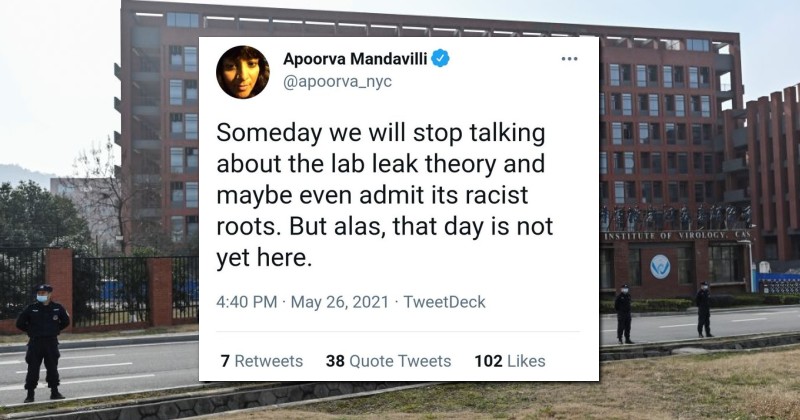 A New York Times reporter who specializes in COVID-19 coverage tweeted that it was “racist” to even talk about the Wuhan lab leak theory.

The lab leak issue has received a wave of attention following the Biden’s administration’s announcement that a 90 day investigation would be conducted into its veracity.

The NYT itself also reported yesterday that the U.S. intelligence community has been sitting on a “raft” of evidence pertaining to the Wuhan Institute of Virology.

However, Apoorva Mandavilli, who in her bio says she reports for the NYT “mainly” on COVID, asserted in a tweet that even discussing the issue was “racist.”

“Someday we will stop talking about the lab leak theory and maybe even admit its racist roots. But alas, that day is not yet here,” tweeted Mandavilli.

She faced immediate pushback and subsequently deleted the tweet.

“It damages the NYT’s reputation to have a key reporter on the most important story of the year say a valid news angle shouldn’t be discussed because it has “racist roots.” Aren’t they supposed to be in the news business?” asked Josh Barro.

It damages the NYT’s reputation to have a key reporter on the most important story of the year say a valid news angle shouldn’t be discussed because it has “racist roots.” Aren’t they supposed to be in the news business? https://t.co/OVaQ0ysCzz

“Oh my god: I didn’t realize what her job is,” remarked investigative journalist Glenn Greenwald. “Can someone explain to me why it’s racist to wonder if a virus escaped from a Chinese lab, but it’s not racist to insist that it infected humans because of Chinese wet markets? If anything, isn’t the latter more racist?” he asked.

Oh my god: I didn't realize what her job is.

The NYT's COVID reporter is saying we should stop talking about the lab leak theory — *even if it's how COVID entered humans *– because that theory (unlike, I guess, the wet market theory) is racist.

Who cares what happened: NYT. pic.twitter.com/NAtI9N2mJx

For nearly a year, President Donald Trump was repeatedly smeared as a racist by the media merely for pointing out that the virus originated in China.

The World Health Organization also advised countries not to impose border controls in the early weeks of the pandemic so as to avoid the “stigmatization” of Chinese people.

This advice was taken by the British government, with Prime Minister Boris Johnson’s former chief adviser revealing earlier this week that Johnson didn’t want to shut down the border for fear of being labeled “racist.”

Apparently, not being called racist is more important than stopping a deadly pandemic or investigating the origin of where it came from.