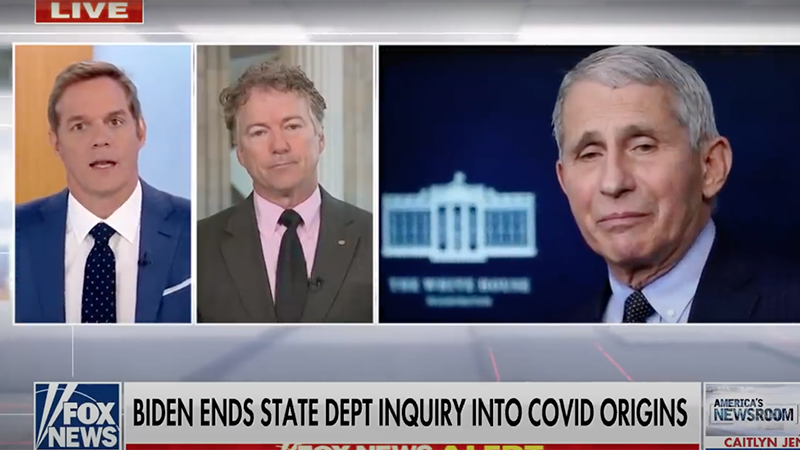 Senator Rand Paul, who has spearheaded the renewed push to investigate the origin of the coronavirus pandemic, has called for Dr Fauci to be placed under oath and made to testify about the murky ‘gain of function’ research he was involved with funding at the Wuhan Institute of Virology.

Paul also urged that Fauci “needs to be excluded from the investigation” because he is too deeply involved in the whole thing.

Appearing on Fox News, Paul spoke about the funding that Fauci and the NIH supplied to China.

“Well, sure it’s a lot. And there are some reports that it added up to millions over time. But the other thing he said was that there was no gain of function in the application. There are scientists who looked at the application and who absolutely and categorically disagree with him,” Paul noted.

“The other evidence that we have is Dr. Shi from the Wuhan lab published a paper that is clearly about gain of function and it that she thanks her group and Dr. Fauci for funding that paper. So there are a lot of contradictions going on,” Paul added.

“I think Dr. Fauci should be made to testify under oath about the money that was given to the lab,” Paul said, adding “The good news is yesterday I passed an amendment on the Senate floor that says no more gain of function money can be sent to China.”

“The bottom line, he cannot investigate himself. If he was responsible for giving this money. He has every incentive to cover it up and not reveal the truth about it because if the pandemic did come from the lab, he would have great culpability in this,” Paul further emphasised.

“This is very important because this could happen again,” Paul warned, adding “I mean, they are experimenting with the SARS virus, which is 15 times more deadly than COVID-19. COVID-19 kills 1%… more than 3 million people. If SARS got out of the lab, that could be 50 million people. This is a very important task ahead of us. We have 11 labs in our country that do this kind of research.”

In a separate appearance on the Christian Broadcasting Network on Tuesday, Paul called for Fauci to be fired, asserting “The nicest way to say this, I think he’s obfuscating the truth.”

After denying for months there was even any gain of function research going on at the Wuhan lab or that it was being funded by the US, Fauci completely reversed his position, admitting that there was ‘modest’ funding of the research, leading Paul to accuse Fauci of ‘perjury’.

The results of the US-backed gain of function research at Wuhan was published in 2017 under the heading, “Discovery of a rich gene pool of bat SARS-related coronaviruses provides new insights into the origin of SARS coronavirus.”

Fauci has come under increased scrutiny as the NIH’s involvement with the $3.7 million grant to the Wuhan Institute is further being called into question.

General Flynn Believes COVID Was A “Weaponized Operation” By China