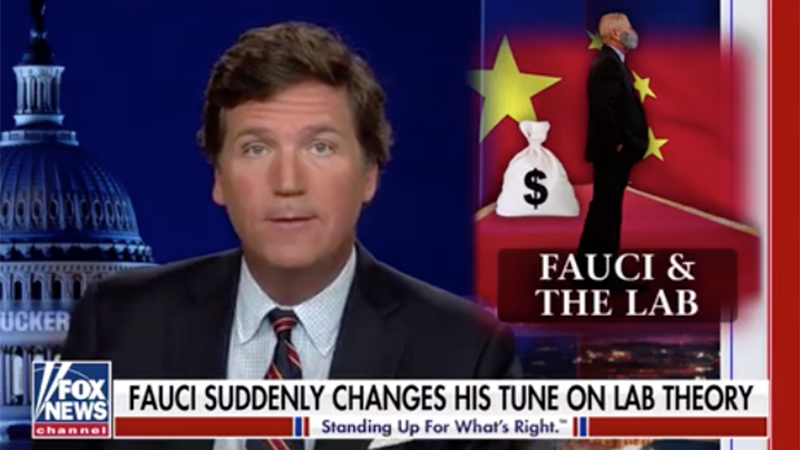 Outspoken host Tucker Carlson outlined Monday how the possibility of a lab leak causing the coronavirus outbreak was dismissed and lied about for over a year by those directing the pandemic response, and is only now emerging as a serious prospect because of the persistence of those who refused to be silenced.

“Pretty much every sane person acknowledges at this point that the government of China likely caused the single worst man-made disaster in human history,” Carlson noted, citing the release of a US intelligence document acknowledging that workers at the Wuhan Institute of Virology were hospitalised in November 2019.

The host noted that Anthony Fauci has admitted that he had no idea about the revelations, even though they were first brought to light in January, and rumours about the workers getting sick have been known for over a year.

“Fauci’s own employers, the U.S. government, publicly released compelling evidence that the virus that he has devoted his life to fighting, did not come from food, but instead escaped from the very bio lab that Tony Fauci has sent American tax dollars to fund,” Carlson announced.

“Yet somehow Tony Fauci didn’t know this… Can we really believe that? No, of course, we can’t,” Carlson continued, adding “right around the time those Chinese researchers became the world’s first COVID patients, the government of Thailand contacted the CDC and Tony Fauci’s office to say its intelligence service had picked up ‘biological anomalies’ around the lab in Wuhan. In other words, there had been a leak.”

Carlson continued “several other allied foreign governments, including the governments of France and Australia, have gathered evidence showing the virus escaped from a Chinese lab. Yet Tony Fauci, who runs the whole thing, didn’t know any of this? Come on. Of course he did.”

“Fauci has known from the beginning the virus may very well have come from that lab. Many people have known that. Fauci just lied about it for more than a year,” Carlson urged.

Carlson went on to explain how Fauci’s public statements regarding the outbreak and the Communist Chinese government are remarkable in this context.

“Tony Fauci was perfectly aware that China may have created this virus, and he knew for a fact that the government of China was lying, covering its tracks, and pushing the world health organization to do the same,” Carlson charged.

The host added that “the most galling part” of this is the fact that while Fauci and the health authorities lied, “those few journalists and scientists who told the truth about what happened in Wuhan were punished for telling the truth.”

“They were attacked by CNN, censored by Facebook, denounced by their colleagues. They were destroyed in some cases. Where’s their apology? Who’s paying into their reparations fund? No one of course.,” Carlson emphasised.

Carlson concluded by warning that “The WHO, which followed China’s instructions and told the world that COVID wasn’t really transmissible by air, now has the full support of the Biden administration.”

“This is despite the fact American intelligence can prove that the WHO lied, and people died as a result of those lies. Even as of now, the U.S. government has not launched any broad and serious investigation into where the coronavirus came from.” Carlson added.

In a separate Fox News broadcast Monday, former Secretary of State Mike Pompeo, who has continually spoken about the evidence of a lab leak, expressed his disgust at witnessing government scientists over the past year dismissing the possibility of COVID-19 originating from a lab “when they surely must have seen the same information that I had seen.”