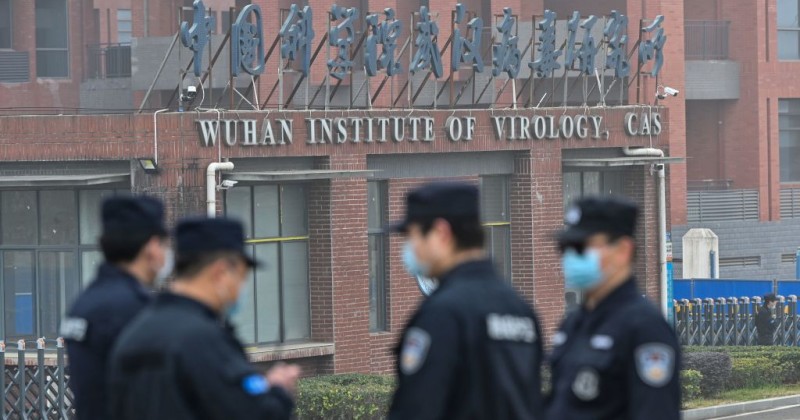 Politifact has been forced to pull a ‘fact check’ that claimed it had “debunked” the lab leak origin theory of COVID-19 after more prominent voices suggested the explanation was a reasonable possibility.

The original ‘fact check’ was entitled ‘Tucker Carlson guest airs debunked conspiracy theory that COVID-19 was created in a lab’ and was rated “pants on fire,” meaning that the lab leak theory was completely untrue.

However, the entry has now been updated with an editor’s note which basically reverses the judgment.

“Editor’s note, May 17, 2021: When this fact-check was first published in September 2020, PolitiFact’s sources included researchers who asserted the SARS-CoV-2 virus could not have been manipulated. That assertion is now more widely disputed. For that reason, we are removing this fact-check from our database pending a more thorough review. Currently, we consider the claim to be unsupported by evidence and in dispute. The original fact-check in its entirety is preserved below for transparency and archival purposes. Read our May 2021 report for more on the origins of the virus that causes COVID-19.” 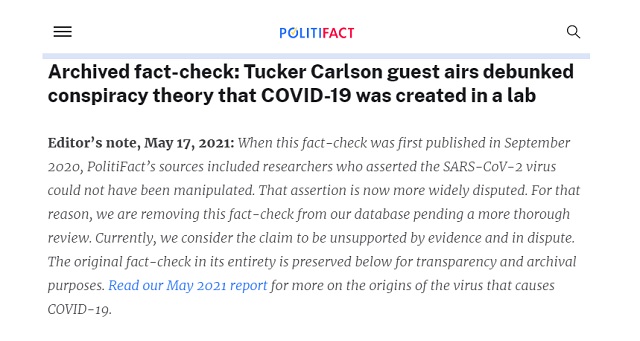 As we highlighted yesterday, even Biden’s own CDC Director Rochelle Walensky admits it’s a “possibility” the virus was leaked from the Wuhan Institute of Virology, an opinion more than shared by her predecessor Robert Redfield, who told CNN in March that it was the “most likely” explanation.

Numerous other credible individuals and scientific groups have also asserted that the lab leak is the most likely source and demanded the World Health Organization conduct a proper investigation.

However, up until recent weeks the media has long characterized such claims as “dangerous misinformation” or “conspiracy theories” and sought to expunge them from social media networks.

“Is Politifact going to get blacklisted by Google and banned from social media for publishing this “misinformation”?” asks Chris Menahan. “Are they going to have their PayPal and bank accounts closed? Of course not, instead they’re going to continue being artificially propped up by Google and shoved in everyone’s face for social engineering purposes.”

This once again illustrates how ‘fact checks’ are routinely abused in order to falsely discredit stories and narratives that are damaging to establishment entities.

By slapping a ‘fact check’ on a story and claiming it’s been “debunked,” the establishment media can then push for those who still insist on discussing the issue to be silenced and deplatformed.

How many other matters dubbed “conspiracy theories” and ‘fact checked’ over the years have since also turned out to be true?