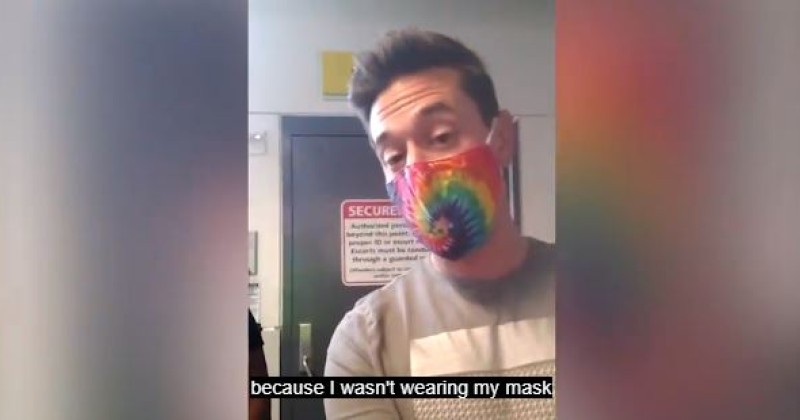 A man was kicked off a Southwest Airlines flight because he didn’t wear his mask in between eating bites of food, which according to the TSA is now a federal mandate.

“I, Avi Mandel, just got kicked off a plane because I wasn’t wearing my mask in between bites while I was eating,” said Mandel in a video shot immediately after the incident, which occurred while the plane was waiting to take off from Thurgood Marshall Baltimore Washington International Airport.

“The way I was treated was absolutely absurd. It was crazy and it wasn’t fair,” Mandel subsequently told WJZ, explaining that he had opened a pack of Twizzlers but was then told to mask up by a flight attendant who immediately “ran away.”

A loudspeaker announcement was then made to all passengers telling them, “Everyone who’s eating has to wear masks in between bites.”

The plane then returned to the terminal and Mendel, who said he remained calm throughout the incident, was escorted off by security.

“That is so wrong. He did nothing wrong. Wow!” passenger Stephanie Misiaszek commented during Mandel’s removal.

The most stunning aspect of this story is not that flight attendants were pedantically enforcing a stupid rule made up on a whim, but that this ludicrous practice is now a federal mandate.

After Mandel emailed Southwest, he was told that it is now official TSA policy.

“According to the Transportation Security Administration, passengers may remove masks while eating, drinking or taking medications but must put them on between bites and sips — and cannot leave them off for “prolonged periods,” reports the New York Post.

“If I knew this rule ahead of time, I would have happily listened, but I had no clue,” said Mandel, who has vowed never to fly with Southwest again.

Hysterical Imbeciles Cancel Jeopardy! Winner For “White Supremacist” Hand Sign That Had Nothing to do With White Supremacy

UK: Christian Pastor Arrested For Saying Marriage is Between a Man and a Woman