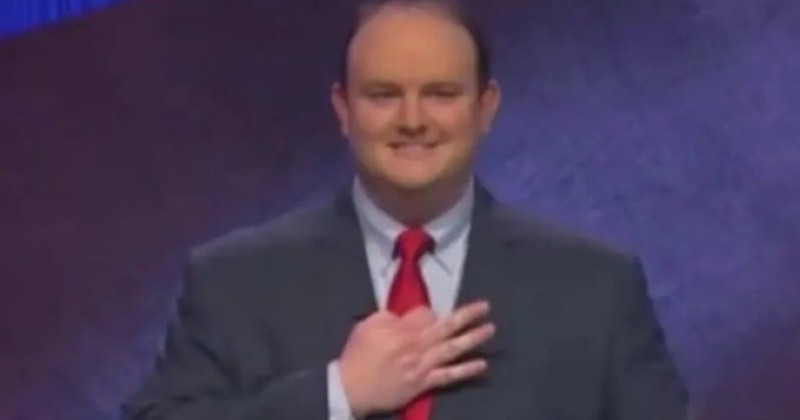 In the latest hysterically contrived moral panic, a Jeopardy! winner is now facing cancellation by the mob for doing a “white supremacist” hand sign despite the fact that it was actually supposed to indicate the contestant had won three games.

“A group of 467 purported former participants on the show posted an open letter on Medium on Wednesday accusing the syndicated game show’s producers of failing to catch what they allege is a white power hand gesture,” reports Hollywood Reporter.

“On Tuesday, when winner Kelly Donohue was introduced as having won three games, he “held his thumb and forefinger together with his other three fingers extended and palm facing inward, and he tapped his chest,” the letter noted.”

In reality, Donohue explained on Facebook how the gesture actually represented the fact that he’d won three games, with the contestant adding that he had displayed one finger and two fingers to denote victories in previous rounds.

“Regardless of [Donohue’s] stated intent, the gesture is a racist dog whistle,” the letter absurdly argued, blaming the producers for allowing it to be broadcast.

“We really hope to see a statement and a disavowal of both of this week’s events, and we would like to see Jeopardy! address Kelly’s behavior,” said the letter.

Instead of the proper response to this weaponized idiocy, which is to laugh it out of the room, the media is actually treating it as a genuine issue.

Donahue performed the usual ill-advised stunt of apologizing to the mob and appealing to their reason, a futile effort since they don’t have any, by prostrating himself in a Facebook post.

The hysterical moral panic over the ‘OK’ hand gesture began when 4chan created it as a troll to bait gullible leftists into thinking it was an actual thing, and now because of their unchecked paranoia, it is.

“I’m truly horrified with what has been posted about me on social media. I absolutely, unequivocally condemn white supremacy and racism of any kind. People who know me personally know that I am not a racist, but for the public at large it bears repeating: I am not a racist and I reject and condemn white supremacy and all forms of bigotry for the evil they are. It’s shameful to me to think anyone would try to use the stage of Jeopardy! to advance or promote such a disgusting agenda. During the taping of my fourth episode, I was simply raising three fingers to mark my 3rd win. There was nothing more I was trying to indicate. I deeply regret this terrible misunderstanding. I never meant to hurt a soul and I assure you I am no friend of racists or white supremacists.”

This story belongs in a Babylon Bee tweet, not in major news publications.