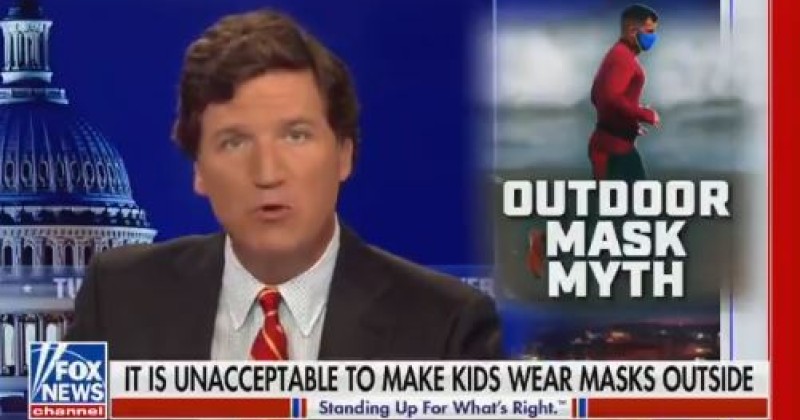 Leftists reacted with fury after Fox News host Tucker Carlson said people who wear masks outside should be mocked and that parents who made their kids wear them were engaging in “child abuse.”

Carlson noted that masks were “purely a sign of political obedience like Kim Il-Sung pins in Pyongyang” and that the only people who voluntarily wear masks outside are “zealots and neurotics.”

He then asserted that the tables should be turned on Biden voters who have been harassing conservatives for almost a year for not wearing a mask in public.

“The rest of us should be snorting at them first, they’re the aggressors – it’s our job to brush them back and restore the society we were born in,” said Carlson.

“So the next time you see someone in a mask on the sidewalk or on the bike path, do not hesitate. Ask politely but firmly, ‘Would you please take off your mask? Science shows there is no reason for you to be wearing it. Your mask is making me uncomfortable,” he added.

Fox News’ Tucker Carlson: "Your response when you see children wearing masks as they play should be no different from your response to seeing someone beat a kid at Walmart. Call the police immediately.”

“We should do that and we should keep doing it until wearing a mask outside is roughly as socially accepted as lighting a Marlboro on an elevator.”

The Fox News host went on to call mask wearing “repulsive” while asserting that forcing children to wear masks outside should be illegal.

“Your response when you see children wearing masks as they play should be no different from your response to seeing someone beat a kid in Walmart. Call the police immediately. Contact Child Protective Services. Keep calling until someone arrives,” Carlson said.

“What you’re looking at is abuse, it’s child abuse, and you are morally obligated to attempt to prevent it,” he added.

As expected, Carlson immediately began trending on Twitter, with hysterical leftists hyperventilating over Tucker once again challenging their cult. Many called for the Fox News host to be fired while others ludicrously described him as a “national security threat.”

As we highlighted yesterday, even Dr. Fauci now admits that the risk of vaccinated people spreading COVID outside is “minuscule,” and yet some health professionals are pushing for the mask mandates to be made permanent.

In a recent open letter to the German government and state premiers, five leading members of the Association for Aerosol Research (GAeF) wrote, “The transmission of SARS-CoV-2 viruses takes place indoors almost without exception. Transmission outdoors is extremely rare and never leads to cluster infections as can be observed indoors.”