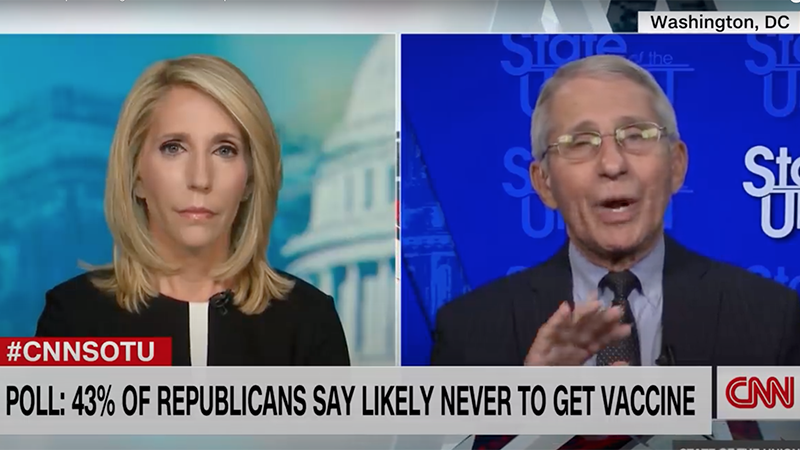 Despite the fact that he continues to not answer any questions and just repeat the same useless talking points, Anthony Fauci refuses to stop being on TV.

Appearing on CNN on Sunday, Fauci repeated the same talking points as he did during a heated back and forth with Congressman Jim Jordan last week, claiming that ongoing coronavirus restrictions have nothing to do with liberties.

Fauci said he finds it “quite frustrating” having to respond to comments like Jordan’s, despite the fact that Jordan was asking basic questions about when lockdowns, masking and other restrictions will be lifted.

Fauci twisted the direction of the conversation to vaccinations, and injected politics, suggesting that it is Republicans who are holding up reopening society because of vaccine hesitancy.

“The fact that one may not want to get vaccinated, in this case a disturbingly large proportion of Republicans, only actually works against where they want to be,” Fauci declared.

“They want to be able to say these restrictions that are put on by public health recommendations are things that they’re very concerned about. We’re all concerned about that. We share that concern. But the way you get rid of those restrictions is to get as many people vaccinated as quickly and as expeditiously as possible,” he added.

“On the one hand, they want to be relieved of the restrictions. But on the other hand, they don’t want to get vaccinated. It just almost doesn’t make any sense,” Fauci further proclaimed.

Many, including Tucker Carlson, have argued that it is Fauci’s refusal to answer basic questions about removing restrictions that is making it appear that the vaccines are ineffective.

In a separate appearance on CBS News Sunday, Fauci again suggested that vaccinated people can still get the virus and pass it on, and that masks are more effective.

Fauci’s comments have prompted Stanford Medical School professor Jay Bhattacharya to label the White House medical advisor as the “number one anti-vaxxer” in America because of his encouraging masks and social distancing measures even if you’re vaccinated.