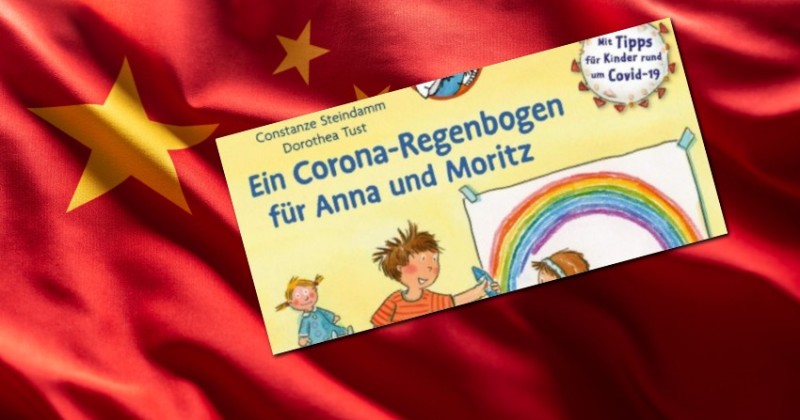 A publisher in Germany has censored a children’s book that said COVID-19 originated in China after Beijing demanded the book’s removal and an apology.

The book, which was originally published a year ago, is called ‘A Corona Rainbow for Anna and Mortiz’ and serves as a guide for elementary schools and daycare centers to follow COVID-safe procedures.

However, Beijing reacted with fury because the book had the nerve to tell the truth – that the virus originated in China.

The Hamburg-based Chinese consulate threatened the publishing company with criminal charges if it didn’t remove the book from circulation and issue a groveling apology.

“Carlsen publishing house complied with the demand,” reports DW, adding that the company has “stopped delivery of the book” and “a new edition with a different wording regarding the origins of the virus is already in the making.”

The company explained that it had been working on assumptions at the time the book was published, but that “today we would no longer use this wording, as its meaning has proven to be far more open to interpretation than we had intended.”

DW expressed shock that China had sought to interfere in a children’s book which ran to just a few thousand copies and why the publishing company was so eager to cave in to a government located 4,600 miles away.

Chinese journalist Shi Ming explained how Beijing was overseeing a global propaganda campaign in an effort to absolve themselves of blame for the pandemic.

“In the beginning, the Chinese propaganda itself said that the disease had first started in China. It even referred to it as ‘Wuhan pneumonia.’ But now, it wants to erase the memory of the virus’ origins with a worldwide political correctness campaign,” he said.

Political expert Ralph Weber says China is trying to create the false narrative that its only role in the pandemic was to successfully fight it off, adding, “For a long time now, China has been influencing cultural life in Europe, and perhaps we haven’t noticed that so far.”

Beijing’s efforts to memory hole the fact that COVID-19 originated in China has been aided in no small part by the mainstream media.

Legacy media outlets have attempted to frame a supposed anti-Asian hate crime wave as being caused by white supremacy and Donald Trump referring to COVID as the “China virus.”

In reality, white people are statistically underrepresented when it comes to committing crimes against Asians.

Video: Board of Trustees Member Has Bizarre Anger Episode While Demanding CDC Mask Mandate Be Maintained