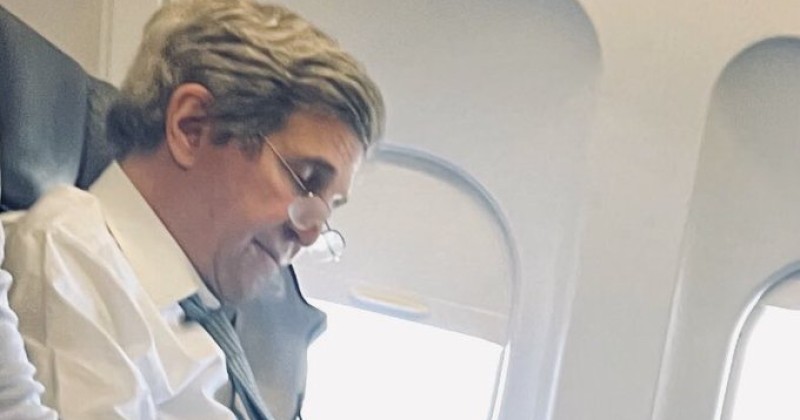 The former Secretary of State didn’t even wait until the plane took off before removing his face covering in violation of both American Airlines’ policy and a CDC mandate requiring masks on flights.

As the Tennessee Star highlighted, Kerry literally let the mask slip as he began to read a book.

“He was not eating, nor drinking. He was simply flaunting Biden’s mandatory mask policy,” tweeted reporter Neil W. McCabe.

@TheTNStar Exclusive: Biden’s @ClimateEnvoy John Kerry, took off his mask as he settled into a book in his first-class seat just before takeoff today on an @AmericanAir flight Boston to DC. He was not eating, nor drinking. He was simply flaunting Biden’s mandatory mask policy. pic.twitter.com/t1wDq9OtxD

An eyewitness told Fox News that Kerry was wearing the mask at the boarding gate but then ditched it as soon as he got on the plane.

“I salute our Very Special Presidential Envoy for Climate for not flying private, but instead flying first class commercial with the rest of us common folk,” said the passenger, adding, “And while he can’t bring himself to follow his own party’s mask restrictions, we should cut him some slack.”

“Being an elite hypocrite is hard work!” the passenger joked.

After being alerted to the violation, American Airlines said they were investigating the matter.

There have been innumerable other instances of politicians who aggressively insist Americans follow mask mandates while themselves flouting them on a whim.

Joe Biden violated his own executive order on the day it was signed when his family took part in a photo-op on federal property after removing their masks.

As Zero Hedge notes, “As ‘elites’ such as Gavin Newsom, Anthony Fauci and President Biden continue to make a mockery of their own pandemic guidelines, Americans are getting arrested at banks, tossed from restaurants and ejected from Costco for not wearing masks.”