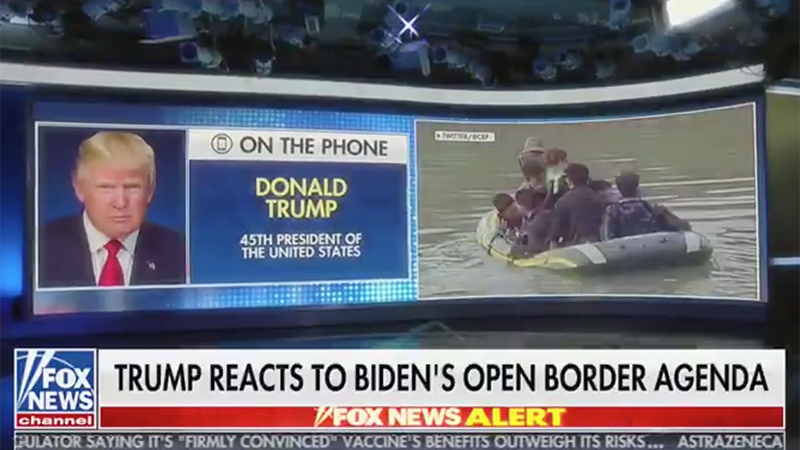 Trump told host Maria Bartiromo that the current administration’s actions in reversing his immigration policies is “destroying our country,” and predicted that tings are going to get much worse.

“My policies were working better than they’ve ever seen on the southern border,” Trump said, adding “The wall was almost complete. We just had to fix little sections, complete little sections that had to be together.”

“But they’re destroying our country,” Trump continued, adding “People are coming by the hundreds of thousands. Young children are coming in and they leave their homes and they come up because they think it’s going to be so wonderful, and frankly, our country can’t handle it.”

“It is a crisis like we’ve rarely had and certainly we’ve never had on the border,” Trump urged, adding “But it’s going to get much worse.”

“I mean, what you’re seeing now is very bad, record numbers, but it’s going to get much, much worse. With a little bit of time, you’ll see those numbers expand at a level like you’ve never seen before,” Trump warned.

Meanwhile, Biden himself denied that his administration is holding children in cells and separating them from their parents saying “We’re not doing that” in a portion of an interview with George Stephanopoulos:

Biden is flat out lying.

As reported by both CBS News and The New York Times, more than 13,000 migrant children are being held in squalid conditions, sleeping on the concrete floors of cinder block cells without any sunlight or showering facilities for up to five days.

Even journalists for far left outlets are appalled by what is unfolding.

“There were lawyers who interviewed some children that were in facilities,” Alcindor said, adding “The children described sleeping on the floor, being hungry, not seeing the sun for days.”

She continued “How is that acceptable for the Biden administration to keep children in those sorts of conditions, given the fact that you said you were an administration that was going to be more humane than the previous one?”

Psaki immediately blamed President Trump, stating “We are trying to work through what was a dismantled and unprepared system because of the role of the last administration.”

Video: Only 1000 People Tune In To Biden Vaccine Speech As ‘President Harris’ Lurks In Background