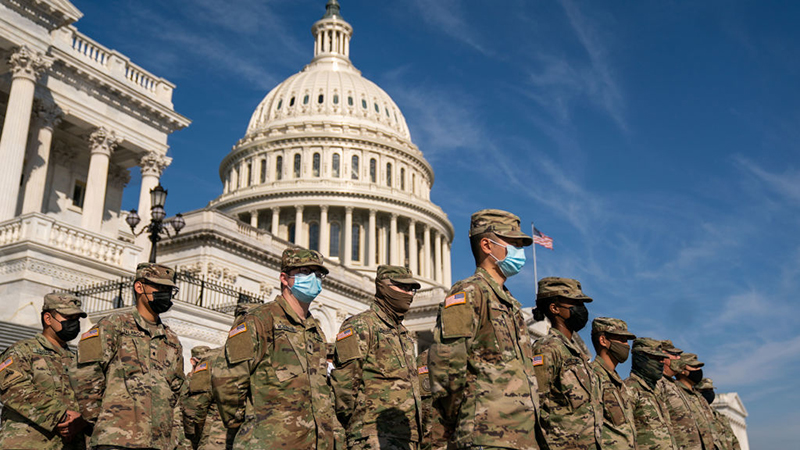 The Biden Administration overruled a request from the head of the National Guard to remove troops from the nation’s capital, instead ordering that the military occupation around the centre of government must continue.

Fox News reporter Gillian Turner revealed Thursday that Gen. Daniel R. Hokanson, penned a letter opposing a further stay of thousands of his National Guard troops in DC, yet was ignored by Defense Secretary Lloyd Austin, referred to as ‘the guy that runs that outfit over there’ by a president who cannot remember his name or that of the building he works in.

Austin instead decided that almost 3000 National Guard troops will stay at the Capitol at least into May.

Hokanson outlined how the National Guard is already over-stretched due to coronavirus constraints, civil disturbances and wildfires.

The General also expressed concerns about how Democrats are using the guard as a permanent military presence.

“I am concerned that the continued indefinite nature of this requirement may also impede our ability to man future missions as both adjutants general and guardsmen alike may be skeptical about committing to future endeavors,” the memo stated.

Pentagon press secretary John Kirby announced that the guard’s presence will continue to be funded by the US military, but refused to reveal specifics of why troops are being kept in DC.

“I’m not going to speak to specific threat. And as I’ve been trying to say over the last few days, it’s not just about the threat environment in a highly polarized, hypercharged environment that we’re in right now,” Kirby declared.

“It is very much about a capacity assistance to the Capitol Police as they begin to flesh out and develop what they’re going to need long term to deal with a new reality on Capitol Hill,” he added.

As we highlighted earlier this week, Democrats want that new reality to consist of some sort of permanent military reaction force.

As commentators such as Tucker Carlson have warned, the troops are not going away, they are there to “prop up the regime”.

Since January 6th, phantom threats, including the likes of “QAnon Inauguration Day”, have been continually touted to maintain the martial law style lockdown of Capitol Hill.