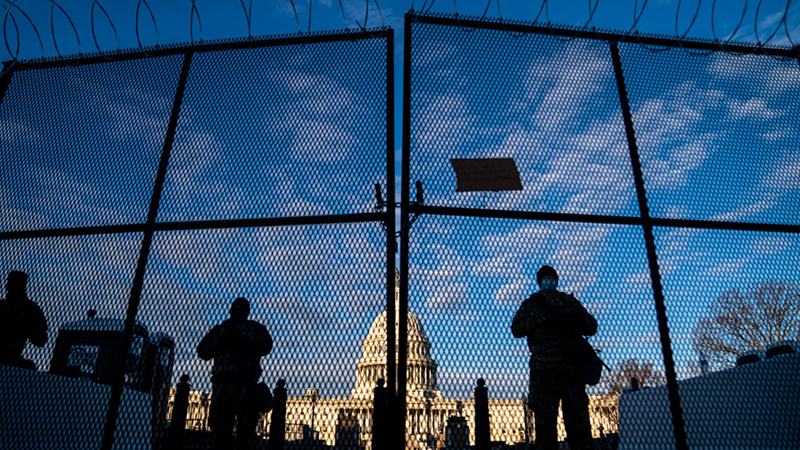 A Democrat appointed ‘task force’ has issued a report recommending a permanent military security force be stationed around Capitol Hill.

The task force, headed up by Army Lt. Gen. (Ret.) Russel L. Honoré, reported back to Nancy Pelosi, suggesting that a “quick reaction force” be formed and put on standby in addition to Capitol police.

The report notes that DC is “a high-value target for foreign terrorists or domestic extremists, yet it has no dedicated QRF for response to crises.”

It adds, “The USCP relies on augmentation from other civilian law enforcement agencies for emergency support, but we recommend establishment of a robust, dedicated QRF, not only for the USCP, but to serve the nation’s capital writ large.”

Elsewhere in the report, it is stressed the the National Guard presence at the Capitol should only be a temporary measure and “not a permanent solution.”

Specifically, the report suggests three forms of occupation in DC.

Firstly, “a QRF from existing federal law enforcement entities with appropriate legal authorities and appropriations to staff, train and equip such a force.”

Secondly, “a QRF under the command of the D.C. National Guard. This could be done by mobilizing military police from Guard elements across the U.S. on rotations of three to six months.”

Thirdly, “a QRF that permanently resides within the D.C. Guard by reestablishing a military police battalion and staffing it with Active Guard Reserve troops.”

In all three scenarios, a permanent military style force would reside in the nation’s capitol.

As conservatives such as Tucker Carlson have warned, the troops are not going away, they are there to “prop up the regime”.

Since January 6th, phantom threats, including the likes of “QAnon Inauguration Day”, have been continually touted to maintain the martial law style lockdown of Capitol Hill.

Poll: 50% Of Americans Have Questions About Biden’s Mental Health

Video: Biden Forgets The Name Of The Pentagon AND His Own Defense Secretary