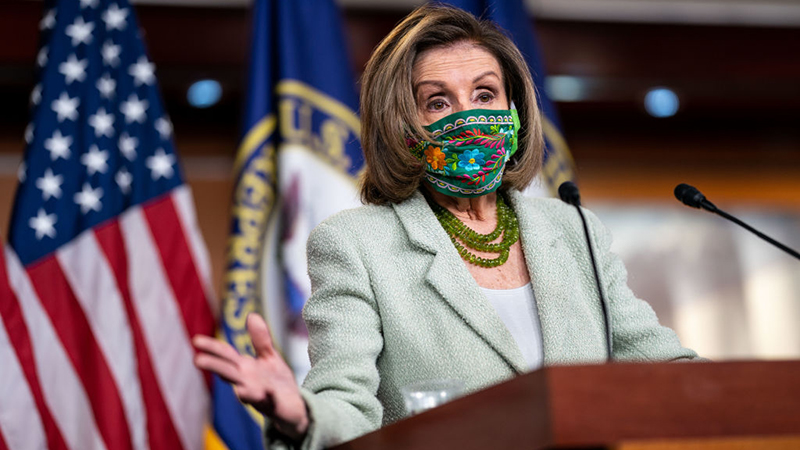 As it was announced that the National Guard will be asked to stay stationed around the Capitol for another TWO MONTHS Thursday, Nancy Pelosi claimed that the centre of government is under threat from “all the President’s men”, a reference to Trump supporters.

“Between COVID — where we need to have vaccinations more broadly in the Capitol so that many more people can come here and do their jobs — [and] the threat of all the president’s men out there, we have to ensure with our security that we are safe enough to do our job, but not impeding [that work],” Pelosi said during a press conference.

Pelosi called for more security around the Capitol, stating “Frankly, there are a lot of us. The Senate is in, and they should be. We’re at least four times more people, and therefore all that that implies in terms of numbers of people in the Capitol — if in fact there’s any troublemakers around.”

“We have to have what we need, when we need it, and in the numbers that we need it,” Pelosi added, further claiming “It’s going to take more money to protect the Capitol in a way that enables people to come here.”

Security was ramped up Thursday amid ‘intelligence’ warnings of militia and QAnon plans to breach the Capitol again to mark the original day that inaugurations used to take place in the US.

Voting schedules were even changed, although Pelosi denied that it was due to any threat, claiming instead that it was a courtesy to Republicans.

“The silliness of this being inauguration day and that the president may be inaugurated falls into the realm of let’s not waste our time on it,” Pelosi said.

“If in fact there are any troublemakers around, it made sense,” Pelosi stated, adding “I don’t think anybody should take any encouragement that because some troublemakers might show up, that we changed our schedule. No, we just moved it a few hours.”

As we previously reported, the Capitol Police Chief has proposed erecting a permanent fence around the centre of government in DC.

Internal documents have also indicated that DC authorities want to keep the National Guard troops in place through the Summer and into Fall.

The January 6th events have been used to implement a military presence around the centre of government, which is now being held in place with fresh ‘threats’ being touted every week as justification.

Video: Hundreds Of Illegals Walk Across Border Into Arizona

Biden Admin Planning For Influx Of 117,000 Illegal Youths To US This Year