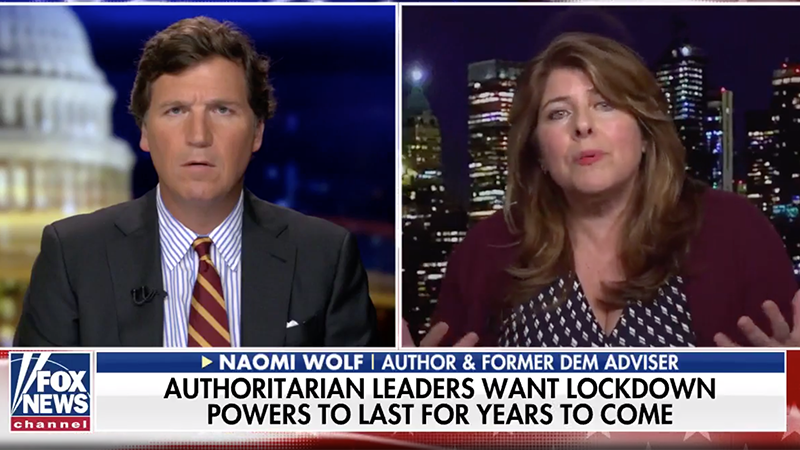 Author and former Clinton advisor Naomi Wolf warned Monday that the US is devolving into a police state under the Biden administration as endless lockdowns and restrictions show no sign of being lifted.

Appearing on Tucker Carlson Tonight, Wolf urged that the US is “moving into a coup situation,” under Democrat rule, owing to medical mandates being extended under the “guise of a real medical pandemic.”

Wolf emphasised that “lockdowns have never been done in society and really, we are turning into a of totalitarian state before everyone’s eyes.”

Far from being a conservative commentator, Wolf pointed out that it’s “not a partisan thing,” and told Carlson that what is happening “transcends everything that you and I might disagree or agree on. That should bring together left and right to protect our Constitution.”

Wolf continued, “The state has now crushed businesses, kept us from gathering in free assembly to worship as the First Amendment provides, is invading our bodies … which is a violation of the Fourth Amendment, restricting movement, fining us in New York state … the violations go on and on.”

“Autocratic tyrants at the state and now the national level are creating this kind of merger of corporate power and government power, which is really characteristic of totalism fascism in the ’20’s,” Wolf further warned.

“They are using that to engage in emergency orders that simply strip us of our rights; rights to property, rights to assembly, rights to worship, all the rights the Constitution guarantees,” the liberal author added.

“I really hope we wake up quickly,” Wolf proclaimed, adding “history also shows that it’s a small window in which people can fight back before it is too dangerous to fight back.”

Less than a week after the election, Wolf expressed regret for voting for Biden, saying that she would never have done so if she had known he was committed to endless lockdowns:

If I’d known Biden was open to ‘lockdowns’ as he now states, which is something historically unprecedented in any pandemic, and a terrifying practice, one that won’t ever end because elites love it, I would never have voted for him.

Elsewhere during Calrson’s broadcast, he declared that the “lockdown regime is moving towards authoritarianism.”

The host told viewers “Bill Gates isn’t God, just a big shareholder in Microsoft. But since COVID, Bill Gates has gained extraordinary powers over what you can and cannot do to your own body. Bill Gates would like you to take the coronavirus vaccine. That’s not a request. If you don’t comply, you could lose your job.”

Carlson continued, asking “what effect will this current suspension of our Bill of Rights have on American society over time? What kind of country will your grandkids live in? Is anyone even asking that question? Not anymore, because questions are disloyal. If you believe in science, simply obey.”