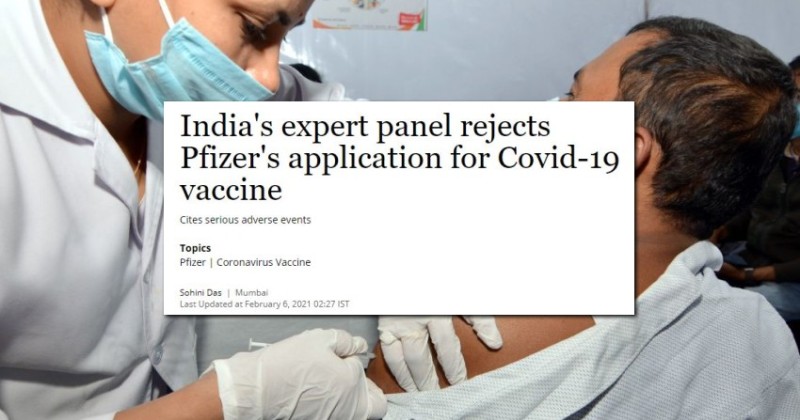 Newsweek published a “fact check” which labeled claims that India had banned the Pfizer-BioNTech vaccine as “mostly false” despite admitting in the article that India has in fact temporarily banned the vaccine.

Last week, discussion around the issue intensified after it was revealed that Indian health authorities had refused to give permission for the vaccine to be distributed.

“On February 3, 2021, India’s Subject Expert Committee (SEC), a panel that advises the nation’s Central Drugs Standard Control Organisation (CDSCO), a national regulatory body focused on pharmaceuticals and devices, ruled that the Pfizer-BioNTech vaccine should not be recommended for an EUA in the country “at this stage,” reports Newsweek.

The report quotes India’s Subject Expert Committee (SEC), which ruled, “The committee noted that incidents of palsy, anaphylaxis and other SAE’s have been reported during post marketing and the causality of the events with the vaccine is being investigated. Further, the firm has not proposed any plan to generate safety and immunogenicity data in Indian population.”

In response, after the meeting with the regulator, Pfizer Inc. withdrew its application for the vaccine’s use in India.

"The committee noted that incidents of palsy, anaphylaxis, & other serious adverse events have been reported during post marketing… Further, the firm has not proposed any plan to generate safety & immunogenicity data in Indian population.#PfizerVaccine https://t.co/QKDQcV6vYF

The Newsweek report admits all this, including but then asserts that that the claim India banned the vaccine is “mostly false.”

Indian authorities refused to allow the vaccine to be distributed in India. That’s also known as a “ban”. The ban might be lifted at a future date, but it’s a ban nonetheless.

But it gets worse.

Bill Gates owns stock in Pfizer Inc. and his Bill and Melinda Gates Foundation has donated significant sums of money to help Pfizer’s development of vaccines.

Interesting to note therefore that a message which originally appeared at the bottom of the Newsweek ‘fact check’ article has now disappeared.

The message read; “Microsoft and partners may be compensated if you purchase something through recommended links in this article.”

It is not known why that message has now vanished.

This is yet another example of how ‘fact checks’ are often completely devoid of facts and are merely a way of legacy media institutions and giant corporations shutting down narratives they don’t like.

Scientists: Vaccination Before EVERY Holiday May Be Needed