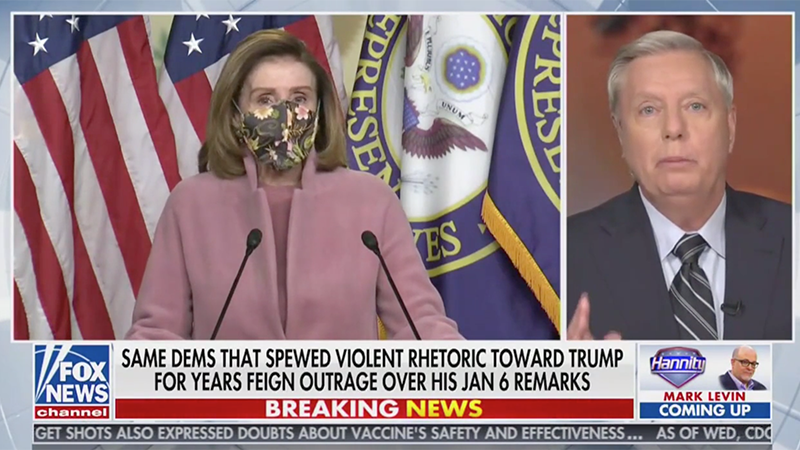 Senator Lindsey Graham suggested Wednesday that Nancy Pelosi knew about the pre-planned riot at the Capitol in January.

In an appearance on Hannity, Graham said “Here’s what I want to know: What did Nancy Pelosi know and when did she know it?”

Graham pointed to FBI communications that have revealed authorities knew there was a threat and that agitators were heading to Washington DC to start a “war”, and had placed pipe bombs in the area the night before.

Graham argued that the FBI revelations disprove the Democrats’ claim that President Trump’s speech and further comments on the 6th of January were the main cause of the unrest.

“The whole storyline, originally, was Trump created this with his speech,” Graham said.

“Now we know that people had this on their mind before he spoke. So now they’re playing this bizarre game of trying to get Trump in on it before Jan. 6…This is why you don’t want to have snap impeachments,” he added.

Referring to the show trial, Graham said that “The not-guilty vote is growing after today. I think most Republicans found the presentation by the House managers offensive and absurd.”

In an effort to prevent Democrat taking his comments out of context, Graham clarified that “We all know what happened in the Capitol was terrible. I hope everybody involved that broke into the Capitol goes to jail.”

Graham also commented on the impeachment managers’ efforts to connect Trump to the Proud Boys organisation, stating “The managers have got this cockamamie idea, an absurd theory that Donald Trump was monitoring the Proud Boys website and other far-right websites and he and [former White House Deputy Chief of Staff] Dan Scavino knew this was going to happen and they encouraged it.”

“That is Looney Tunes,” Graham urged.

Democrats: It Would Be Founders’ ‘Worst Nightmare’ If Trump Not Impeached