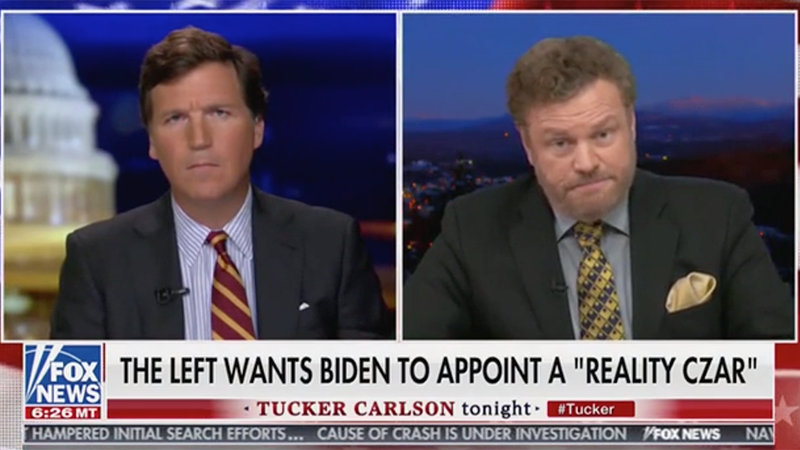 Appearing on Tucker Carlson Tonight Wednesday, author and columnist Mark Steyn warned that we are at the stage where free speech is being mocked by the left as a “right-wing fetish”.

Steyn responded to a call in the New York Times for Joe Biden to appoint a “reality czar” to debunk “disinformation,” a notion that many pointed out conjures up the Ministry of Truth from Orwell’s 1984.

Steyn emphasised that the left “regard an ever-expanding range of topics as there being a correct view … whether it’s climate change or Islam or same-sex marriage or transgender participation in sports, there is a settled view and once we have settled it we need no longer need to debate.”

“The problem is there are an ever-expanding range of issues that are added to the list,” Steyn continued, adding  “in the United States, where disagreeing with the official state position on, for example, a new coronavirus that nobody heard of a year ago and nobody knows anything about — just disagreeing with officialdom now is forbidden.”

“That is why the weasel phrase ‘disinformation’ — what is the information you are dissing? It’s official information. Ministry of Information information,” Steyn added.

Steyn further described “a malign alliance in Washington between big-tech and the state,” and noted “we are moving into a literally Orwellian world where phrases out of 1984, he uses the phrase ‘reality control’… The New York Times is in favour of establishing a Federal Agency of ‘reality control’.”

“These people are so unself-aware, and frankly so illiterate that they don’t even realise that these are tired ideas that they are lifting from a 70 year old indictment of the totalitarian state,” Steyn urged.

Carlson then chimed in “I wonder if that book is even read anymore, or if it is even allowed.”

“How long before Orwell himself is banned?” Carlson asked.