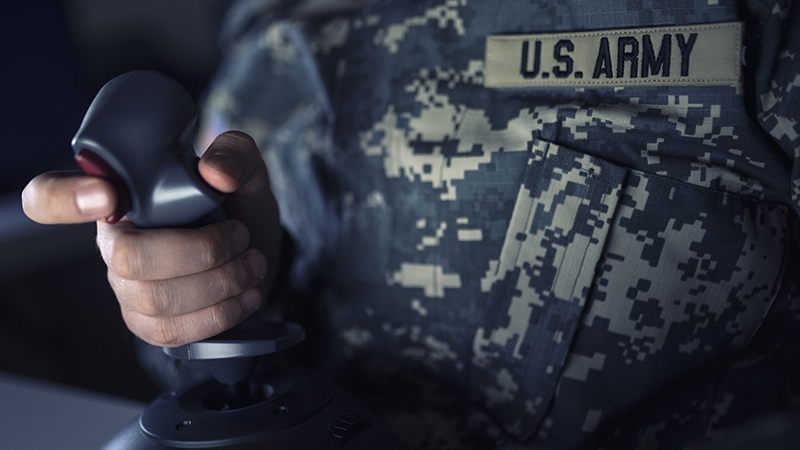 The former head of the CIA Counterterrorism Center has suggested that counterinsurgency tactics used by the military in Iraq and Afghanistan should be applied to ‘domestic extremists’ inside the US.

NPR reports that Robert Grenier, who directed the CIA’s Counterterrorism program from 2004 to 2006, declared “We may be witnessing the dawn of a sustained wave of violent insurgency within our own country, perpetrated by our own countrymen.”

In an op-ed for The New York Times last week, Grenier suggested that “extremists who seek a social apocalypse … are capable of producing endemic political violence of a sort not seen in this country since Reconstruction.” 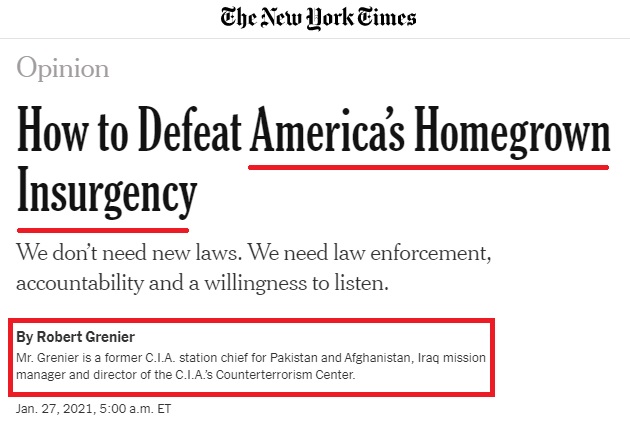 Grenier, also a former CIA station chief in Pakistan and Afghanistan, grouped together “the Proud Boys, the Three Percenters, the Oath Keepers, ‘Christian’ national chauvinists, white supremacists and QAnon fantasists” and claimed they are all “committed to violent extremism.”

Grenier labeled dissenters an “insurgency” and called for them to be “defeated” like an enemy army.

In further comments to NPR, Grenier stated that “as in any insurgency situation, you have committed insurgents who are typically a relatively small proportion of the affected population. But what enables them to carry forward their program is a large number of people from whom they can draw tacit support.”

Grenier also stated that insurgents may emerge from groups who “believe that the election was stolen,” or those “who don’t trust NPR or The New York Times.”

“The most violent elements that we are concerned about right now see former President Trump as a broadly popular and charismatic symbol,” the CIA spook added, before comparing Trump to Saddam Hussein.

“You know, just as I saw in the Middle East that the air went out of violent demonstrations when [Iraqi leader] Saddam Hussein was defeated and seen to be defeated, I think the same situation applies here,” he proclaimed.

Grenier suggested that Trump should be convicted at the upcoming impeachment trial as a ‘national security imperative’ because “So long as he is there and leading the resistance, if you will, which he shows every sign of intending to do, he is going to be an inspiration to very violent people.”

Grenier then compared Americans to Al Qaeda and the Taliban, noting that in Afghanistan “the thrust of our campaign there was, yes, to hunt down al-Qaida, but primarily to remove the supportive environment in which they were able to live and to flourish. And that meant fighting the Taliban.”

“I think that is the heart of what we need to deal with here,” he added.

Linking to Grenier’s comments, journalist Glenn Greenwald quipped that wedding guests throughout America should watch out for drone missiles:

The call to treat Americans as terrorist insurgents comes on the heels of a Department of Homeland Security warning that those dissatisfied with the election result may rise up and commit acts of terrorism in the coming weeks.

“Information suggests that some ideologically-motivated violent extremists with objections to the exercise of governmental authority and the presidential transition, as well as other perceived grievances fueled by false narratives, could continue to mobilize to incite or commit violence,” stated the bulletin issued last week through the DHS National Terrorist Advisory System — or NTAS.

The bulletin added that ‘extremists’ may be “motivated by a range of issues, including anger over COVID-19 restrictions, the 2020 election results, and police use of force.”

Democrats: It Would Be Founders’ ‘Worst Nightmare’ If Trump Not Impeached

Former CBP Head: Biden Has Decimated Border Protections With ‘Stroke Of A Pen’