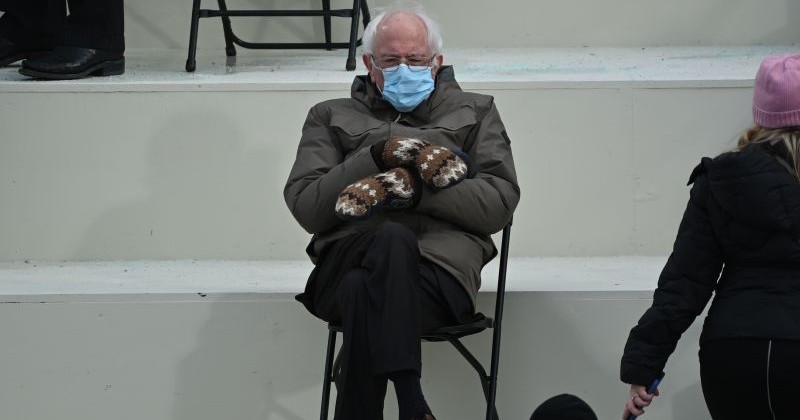 In an article published by the San Francisco Chronicle, a public school teacher asserts that Bernie Sanders’ inauguration mittens are a symbol of “white privilege.”

The article begins with Ingrid Seyer-Ochi revealing how she conducted a lesson on the Capitol building breach, telling her high school students, “This is white supremacy.”

“Across our Zoom screen, they affirmed, with nods, thumbs-ups, and emojis of anger and frustration,” she writes.

Seyer-Ochi, a former UC Berkeley professor, then explains that she oversaw a similar study of the inauguration (why a teacher is spending so much time analyzing current affairs through her obviously demented far-left bias isn’t explained, but this is San Francisco).

“What do we see?” I asked again. We’ve been studying diversity and discrimination in the United States; my students were ready. What did they see? They saw a white man in a puffy jacket and huge mittens, distant not only in his social distancing, but in his demeanor and attire.”

She then expressed how upset she was that the next day, Bernie was “everywhere.”

Critical Theory achieves ouroboros status with this… and it was only a matter of time: https://t.co/AAwbmDjiBI

“A wealthy, incredibly well-educated and -privileged white man, showing up for perhaps the most important ritual of the decade, in a puffy jacket and huge mittens.”

Still fuming at the onslaught of Bernie memes, Seyer-Ochi whines, “He manifests privilege, white privilege, male privilege and class privilege, in ways that my students could see and feel.”

“I don’t know many poor, or working class, or female, or struggling-to-be-taken-seriously folk who would show up at the inauguration of our 46th president dressed like Bernie. Unless those same folk had privilege. Which they don’t,” she concludes.

The point of her argument seems to be that Bernie didn’t try hard enough when choosing his attire, therefore disrespected “diversity” and is therefore exhibiting “white privilege.”

And remember, this individual is teaching your kids.

Meanwhile, elsewhere in the city, the San Francisco Unified School District Arts Department has announced that “acronyms are a symptom of white supremacy culture” because non-English speakers find them hard to understand.

The department responded by changing its name from “VAPA”, short for “Visual and Performing Arts’, to SFUSD Arts Department – which is still an acronym.

Video: CNN Clown Stelter Argues Censorship Is OK When The Left Does It