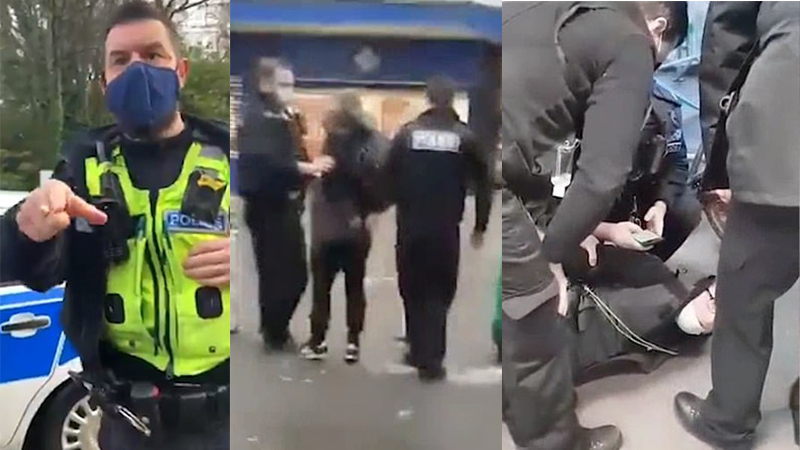 Two viral videos encapsulate the state of the UK at the moment with police abusing powers given to them to enforce lockdown laws. In one case a man was arrested on his way to work for not identifying himself, while another who went to a shop was hauled away for not wearing a mask properly.

West Midlands police were forced to apologise after a man in Solihull was followed, called an idiot, and finally arrested by overly officious police.

The police can be seen harassing the man, asking him where he is going, where he lives and demanding his name.

The guy was just trying to go to work.

When the man refused to give his name, saying “don’t worry about it”, and asked the officer to turn on his body cam, the harassment was ratcheted up.

“What do you mean don’t worry about it?” the officer replied, adding “We’re here to enforce legislation, mate, so I need to know who you are.”

“You don’t need to know who I am – I haven’t committed an offence,” the man replied.

The officer then threatened “under coronavirus legislation you have to provide me with some details, otherwise you’re going to be arrested.”

When the man asked what he was going to be arrested for, the officer said he was “arguing” and that was providing “reasonable suspicion”.

“You’re obviously just harassing me, because I’ve got a hoodie on, I’ve got a coat on, I’m on my way to work, I’m a normal citizen,” the guy replied, adding “Why would I allow someone to just pull me over?”

The officer then replied “We’re the police, we’re not just someone, you idiot.”

“What, so just because you’re the police, that gives you the right to stop anyone you want and get their details?” the man replied, urging “You need to be reinformed about the law.”

The officer then hauled the man away.

The police force later issued a statement noting that “It’s clear that the officer’s conduct fell far below what we would expect.”

“The man explained he was heading to work – that’s clearly a justifiable reason to be out and about and there was no suspicion he had committed any offences,” the statement continued, concluding “As such, he should not have been challenged in the way he was.”

This is far from an isolated incident, with another video emerging showing officers in Merseyside pinning a man to the floor of a supermarket after he refused to give them his name.

Police claim the man was wearing a mask around his neck, not covering the face, which is why officers approached him.

However, the man insisted that he only lowered the mask to clean his glasses, which had steamed up.

“I didn’t want to give my details because I hadn’t done anything wrong and when he grabbed me I tried to pull away,” the man told reporters.

“I was startled and I didn’t know what to do so I tried to get him away from me. He then put my hands behind my back and pushed me onto the floor,” the man added.

Police ejected him from the store and fined him £100, stopping short of arrest.

Supermarkets are being patrolled by police and inspected amid claims that they are not enforcing social distancing rules effectively enough. Some may face fines for ‘bending the rules’, according to reports.

People have been encouraged not to socialise or even talk to friends in the street or supermarket.

Police are also harassing old ladies feeding pigeons, and others walking and sitting on benches in parks or along waterfronts.

The women, Jessica Allen and Eliza Moore, told reporters that the police appeared ‘desperate to fine them’.

As we have previously reported, police recently announced the adoption of a new ‘hardline’ lockdown policy to stop and question people if they are out in the street, and to issue on the spot fines if they cannot provide a reasonable excuse for being out of their houses.

As we also highlighted, police are threatening people with fines if they enjoy winter weather.

Avon and Somerset Police even boasted about fining a person for sitting in their car alone, eating a kebab.

When it comes to following the rules themselves, some police don’t seem to care about complying.

Video emerged of police officers themselves sitting down in a cafe drinking coffee, with the person filming them questioning why they were not following the rules.