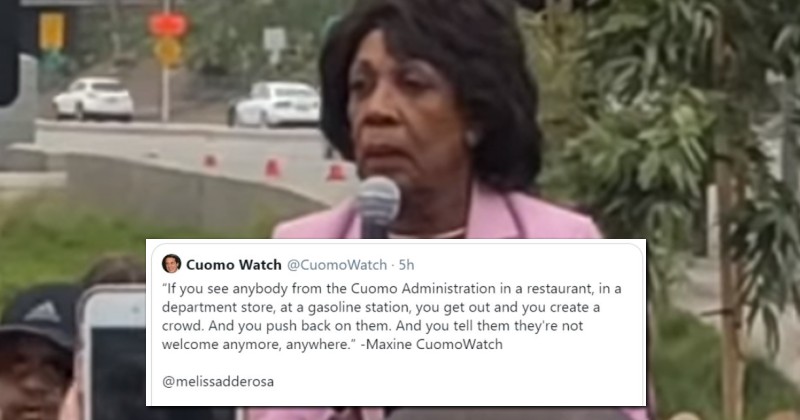 A Twitter troll edited Maxine Waters’ comments in which she urged people to harass Trump officials by applying them to Governor Andrew Cuomo, prompting top Democrats to freak out about “violence.”

Waters originally made the comments in June 2018 when she told a boisterous crowd, “Let’s make sure we show up wherever we have to show up. And if you see anybody from that Cabinet in a restaurant, in a department store, at a gasoline station, you get out and you create a crowd. And you push back on them. And you tell them they’re not welcome anymore, anywhere.”

The call to harass members of the Trump administration was acted upon numerous times over the next two and a half years, including when numerous Republican lawmakers were aggressively confronted by irate leftists after the RNC back in August.

As CNN reported at the time she made the remarks, Democrats “were were reluctant to take on Waters” in response to her dangerous rhetoric.

However, Democrats had no hesitation in denouncing the exact same comments when they were applied to Governor Cuomo.

A Twitter account called Cuomo Watch tweeted the precise quote but swapped out the words “anybody from that Cabinet” and replaced them with “anybody from the Cuomo Administration.”

Griswold’s tweet shows furious reactions from the likes of Speaker of the New York State Assembly Carl E. Heastie, who tweeted, “This is appalling and dangerous. Encouraging violence must never be tolerated. Shame on whoever is behind this kind of garbage.”

His colleague Jeffrey Dinowitz echoed the same sentiment, tweeting, “Threatening violence against duly elected representatives of the people of New York is fascism. The hatred unleashed by Trump and his gang of thugs continues to reverberate throughout the country. Enough is enough.”

Congressman Ritchie Torres raised the issue of the Capitol “insurrection,” asserting that the words were “an invitation to violence against public officials” and an attempt at “inciting political violence.”

Oh boy, they got Ritchie Torres, who's a *U.S. congressman*. Maxine Waters is the chairwoman of his committee. pic.twitter.com/rRSGQLktQx

“It’d be bizarre even if it were legit, because they’re just dogpiling some complete rando, who cares man,” said Griswold.

ME ME ME! AOC Tries to Ruin GameStop Revolt