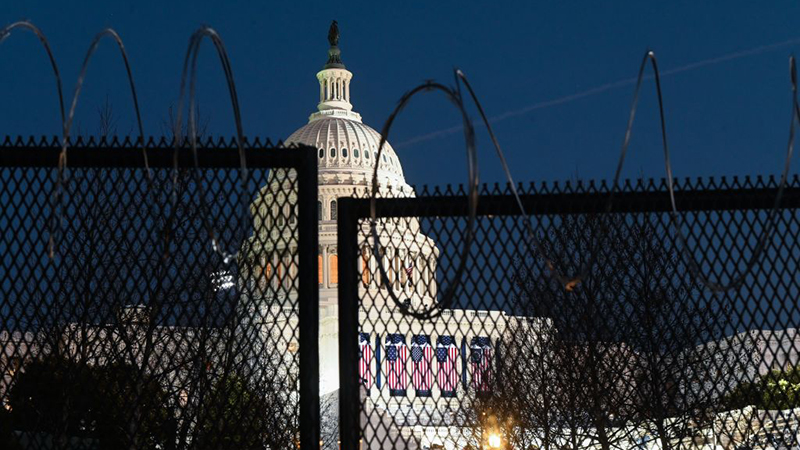 The Capitol Police Chief has proposed erecting a permanent fence around the centre of government in DC, prompting a massive backlash.

The Hill notes that acting U.S. Capitol Police Chief Yogananda Pittman made the call, saying it is necessary to ‘prevent another riot’.

“In light of recent events, I can unequivocally say that the vast improvements to the physical security infrastructure must be made to include permanent fencing, and the availability of ready, back-up forces in close proximity to the Capitol,” Pittman said in a statement.

Since the events of January 6th, a huge eight foot fence with razor wire has been built around the Capitol, prompting comparisons to something out of a Mad Max movie.

The call for beefed up security and a permanent fence in DC comes after Joe Biden signed an executive order on his first day to halt construction of the huge fence at the border.

The call also comes after Nancy Pelosi claimed that “the enemy is within” the House, referring to Republican lawmakers who she says carry guns around the Capitol and have “threatened violence against other members of Congress.”

Pelosi made the comments after a DHS warning called for a continuation of military occupation around government buildings.

The idea of a permanent fence immediately sparked backlash, however.

Washington Mayor Muriel Bowser tweeted “we will not accept extra troops or permanent fencing as a long-term fixture in DC,” but proclaimed that “potentially volatile events” would require temporary extra security.

New York Republican Elise Stefanik, also slammed the idea of a permanent barrier, tweeting “This is the People’s House. I am adamantly opposed. There has been no threat briefing given to Members of Congress to justify this proposal.”

Even some Democrats balked at the proposal:

Senate Majority Leader Chuck Schumer refused to rule out the move to permanently fortify Capitol Hill, telling reporters “I would tend to defer to the experts as to what is the safest way to be. We’ll see, I don’t know.”

Earlier this week it was announced that thousands of National Guard troops are to be kept at the Capitol for weeks, into March and beyond, prompting charges that Democrats have implemented martial law in DC.

FLASHBACK: Biden Said ‘You Can’t Legislate By Executive Orders Unless You’re A Dictator’