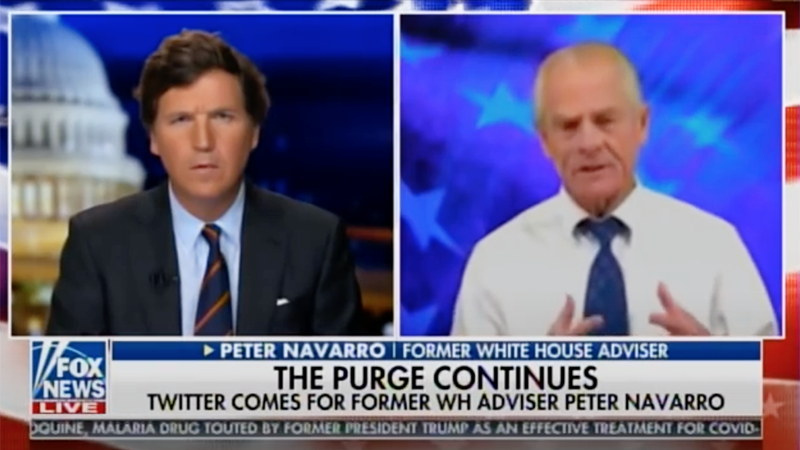 Twitter has banned yet another former Trump official, just two weeks after he described big-tech suppression of free speech as ‘chilling’.

Navarro told Tucker Carlson that this highlights how the ongoing purge is part of a pre-determined agenda.

“It was something about unusual traffic but I hadn’t tweeted since January 14th,” Navarro said.

“The point here is it’s because of who I am and what I might say not because of anything I did,” he added.

“And this is Pichai at Google, Dorsey at Twitter, Zuckerberg at Facebook, Bezos at Amazon. They somehow believe that it’s their responsibility to shut up half of America,” Navarro urged.

“What we have here is a classic collusive oligopoly, a kind of new wine in an old bottle,” Navarro told Fox News, adding “What we saw with this attack on Parler was chilling to me. It’s one thing to deplatform everybody for free speech. But, this was a pincer move where Google and Apple, [the] first part of the pincer, was to not allow Parler apps to be down.”

Navarro added that Amazon then came in for the “brutal kill by taking the cloud away”.

Navarro noted that though the former Supreme Leader of Iran Ayatollah Ruhollah Khomeini was “allowed” to tweet and the “China Communist Party official propaganda organs put things up [on Twitter] all the time,” President Trump had been removed.

During the interview, Navarro also blasted Twitter, pointing out that Iranian and Chinese dictators are allowed to post things all the time on the platform.

“The Twitter censors don’t jump up there and say ‘this is disputed.’ So what is going on here, I think, is a very serious threat to our democracy,” Navarro said.

Twitter even banned the My Pillow guy this week, presumably just because he publicly supported The President of the United States.