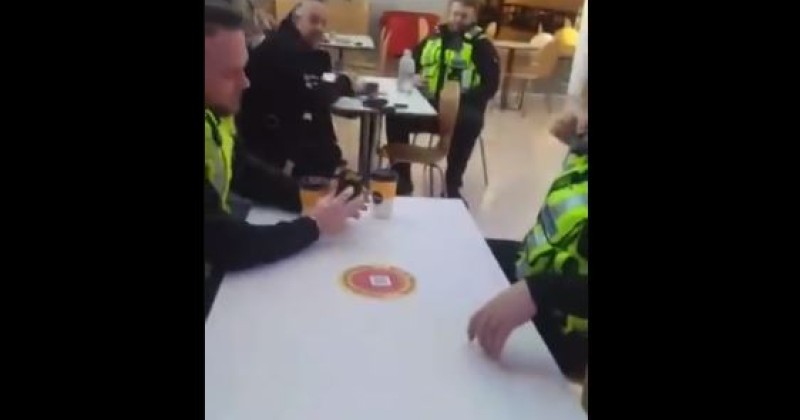 A member of the public caught UK police violating their own lockdown rules during an encounter that was captured on camera.

The clip shows a man approaching four officers who are sat at a table drinking coffee.

Under Tier 4 restrictions, and now under the national lockdown as a whole, it is against the rules to sit at a table and consume beverages or food given that all pubs, cafes and restaurants are closed except for takeaway services.

“Officers, can you just let me know what tier we’re in please?” asks the member of the public.

The lockdown police know it’s all bullishit. The rules, the masks, the tickets. But they’re exempt, so they’re fine with it. It’s probably fun for some of them, the ones who became police for the thrill of wielding power. pic.twitter.com/2z4YpAAZxz

When one of the officers responds, the man explains, “You’re not supposed to be sitting down in a restaurant – takeaway service only, I’m sure that’s what they said.”

After the officers say they are on a break, the man responds, “If the rules say I can’t sit in a restaurant, why are you?”

The man filming the encounter then makes sure to get the officers’ badge numbers.

After the officers tell the man to “grow up,” they then approach him and try to get in his personal space. None of the officers are wearing a face mask.

The officer finishes by claiming, “We work really hard,” which doesn’t explain why he’s allowed to violate laws others are mandated to follow.

The violation is particularly ironic given that police have become infinitely more draconian over the last 48 hours in enforcing England’s new national lockdown.

People are being interrogated on the street and others are being fined for going for walks in rural locations.

A family in Scotland were also arrested after police entered their home following a tip off from a neighbor that there were “too many people inside.”

UK Government May Only Let People Out ONCE A WEEK