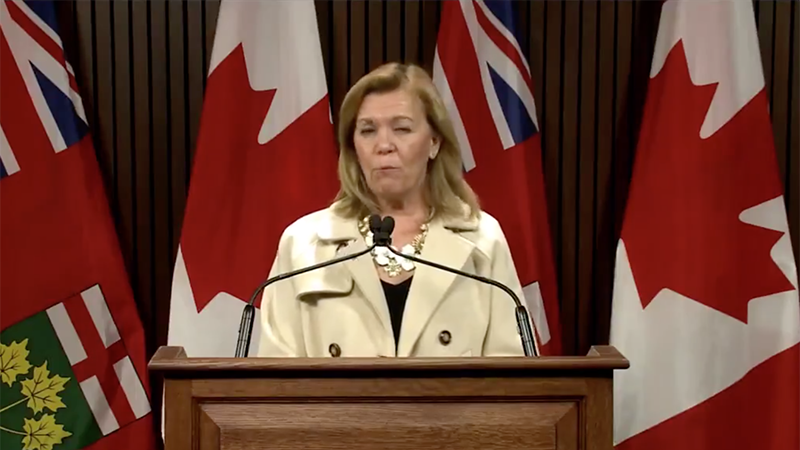 The Health Minister of Ontario in Canada has stoked controversy by suggesting that people who do not take the coronavirus vaccine will face restrictions on where they can travel and spend time.

When asked by reporters about how the government intends to go about convincing people to get the vaccine, Health Minister Christine Elliott warned that those who refuse it will face difficulties reintegrating into society.

“That’s their choice, this is not going to be a mandatory campaign. It will be voluntary,” Elliot said, but adding that “There may be some restrictions that may be placed on people that don’t have vaccines for travel purposes, to be able to go to theatres and other places.”

When another reporter asked if the government would be introducing ‘immunity passports’, or proof of vaccination cards, Elliot said “Yes, because that’s going to be really important for people to have for travel purposes, perhaps for work purposes, for going to theatres or cinemas or any other places where people will be in closer physical contact.”

Proof of vaccination will be "essential for people to have" – Health Minister, Christine Elliott pic.twitter.com/F40QhdwynM

1/Ontario Health Minister @celliottability: “If people choose not to get the vaccine they may not be able to do certain things, but that will be their choice”@fordnation govt is HIGHLY unethical/unlawful—violating Nuremberg Code in UN’s international lawpic.twitter.com/K1F1hZzJMs

Following up on Elliot’s comments, The Toronto Sun spoke to her press secretary, who confirmed that the government is exploring several options for vaccine “tracking and surveillance.”

Sun reporter Brian Lilley notes “That phrase will set off alarm bells and it should, not just for anti-vaxxers, but for anyone who is concerned about Charter rights and governments running roughshod over them.”

Paul Joseph Watson guest hosts The Alex Jones Show to break down the atrocities of the growing medical tyranny across the globe.

Ontario Chief Medical Officer of Health Dr. David Williams has also said that a COVID-19 vaccine may be required for “freedom to move around”.

“What we can do is to say sometimes for access, or ease, in getting into certain settings, if you don’t have vaccination then you’re not allowed into that setting without other protection materials,” Williams said.

The comments of these Canadian officials add to the litany of other government and travel industry figures in both the US, Britain and beyond who have suggested that ‘COVID passports’ are coming, in order for ‘life to get back to normal’

In an essay in The Wall Street Journal on Saturday, former Centers for Disease Control and Prevention director Tom Frieden noted that he expects the so called ‘immunity passports’ will come into widespread use despite any ethical, legal or operational challenges, and despite the fact that it hasn’t at all been determined whether the vaccine equates to immunity.