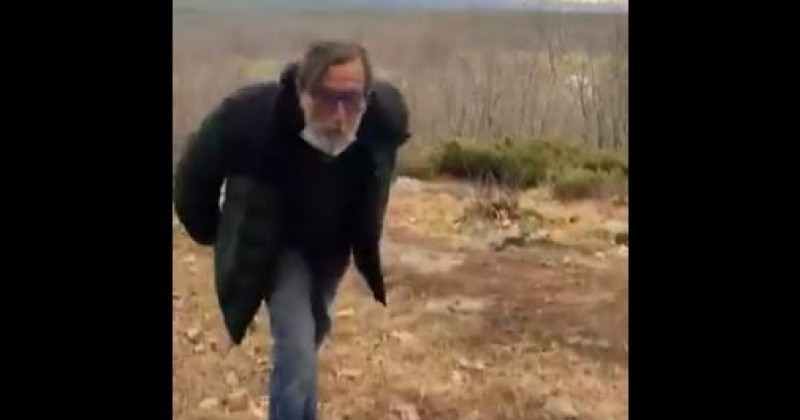 A man who was angry at a pair of female hikers for not wearing masks spat at them before claiming, “I have COVID.”

The video clip shows the man walking up to the pair before he spits towards them and says, “I have COVID, I’ve been tested positive,” before spitting at them again.

Throughout the encounter, what appears to be the man’s wife is frantically calling on him to end the confrontation.

“I have COVID,” this man in Ashburnham says as he spits in the direction of two women taking a hike Sunday afternoon. Based on a verbal confrontation early in the video, he was upset the women were not wearing a mask while hiking. Now police are looking for him. #WBZ pic.twitter.com/kLR9dcPd6W

According to the The Ashburnham Police Department, the man had told the women it was the “law” to wear masks and that they were “irresponsible” for not doing so.

A longer video provided to CNN apparently shows the man asking, “You’re not wearing a mask?”

“I don’t care, I’m not gonna wear a mask when I’m outside,” responds one of the women.

After he spat at them, the man also called the women “completely arrogant.

“The man could face a misdemeanor charge of assault and a charge of false threat of a biological agent, which is a felony,” reports CNN.

First of all, this guy has obviously being driven crazy by hysterical media propaganda about COVID.

Secondly, he’s not even wearing a mask over his face when he confronts the women.

The irony of him asserting the women are being “irresponsible” by not wearing masks as he literally spits at them doesn’t need to be explained.

Face masks are now legally mandated in all outdoor areas in Massachusetts and there is no exemption for people who are exercising or hiking, despite the fact that this could actually pose a serious health risk.

Head of WHO Suggests COVID Restrictions Will Continue Even After Vaccine